At a Glance | Wins keep rolling in for Kiwi wāhine 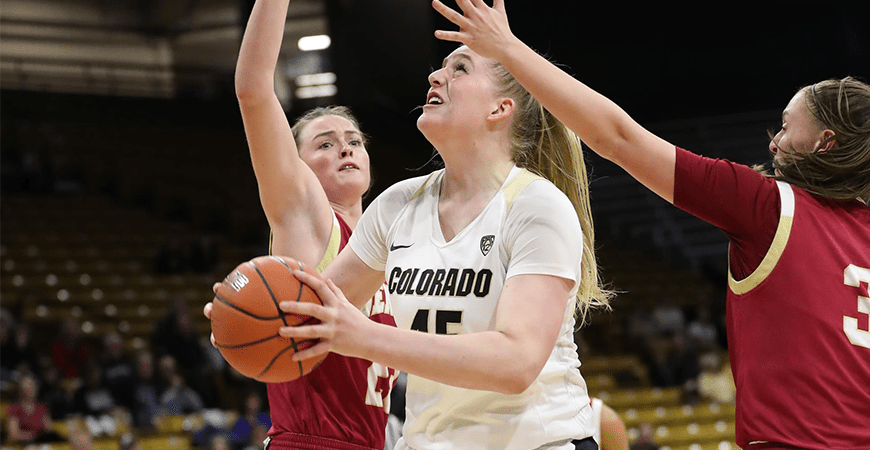 It’s been another busy week of action in women’s basketball in the States.

As we mentioned last week, after her 29-point outing for Washington State (WSU) at Arizona State Charlisse Leger-Walker earned her 7th Pac-12 Freshman of the Week award. Another amazing pair of performances from the freshman didn’t garner her an 8th gong, but she must have been awfully close.

On Friday, WSU suffered a disappointing 60-57 to Colorado yet Leger-Walker was still able to put together an amazing stats line of 21 points, 13 rebounds (seven offensive boards), four steals, three blocks and two assists. Her former Junior Tall Ferns teammate, Charlotte Whittaker, had a rebound and an assist for Colorado).

Fast forward 48 hours and Leger-walker compiled another eye-catching set of numbers as WSU defeated Utah 68-55. She knocked down four of seven threes on her way to 22 points, six rebounds and two steals.

Sister Krystal was also busy dishing 11 assists to accompany seven points, four rebounds and a couple of steals. Those numbers mean Krystal has passed 200 points for the season and is five assists short of 100 dimes in 20 games.

Virginia Commonwealth University (VCU) enjoyed double success with victories over La Salle (63-62 in overtime) and a more convincing 64-49 against St Joseph’s. Tall Fern Akienne-Tera Reed tallied 11 points, nine rebounds and four assists against La Salle followed by 14 points against St Joe’s. VCU improved to 9-4 off the back of the wins, equal 4th in the Atlantic 10 Conference.

Also in the West Coast Conference, Emme Shearer is enjoying an excellent freshman season at the University of Portland. However, her 11 points (4/8FG) couldn’t prevent BYU and the New Zealand duo of Tegan Graham and Kaylee Smiler from defeating them 75-68. Graham filled the stats line with eight points, four rebounds, five assists, two blocks and two steals.

In Junior College Jazz Kailahi-Fulu and Keeley Tini are in terrific form for Williston State College. The pair won a Sal’s NBL Championship with the Harbour Breeze last year and are carrying the form demonstrated in that campaign into 2021. In their latest performances, Kailahi-Fulu scored 15 points and Tini notched 13 as Williston sunk Bismarck College 57-51

Kailahi-Fulu is 9th on the national Junior College leaderboard for scoring averaging 15.6ppg and 10th in rebounding averaging 8.7rpg. Tini is not far behind averaging 14 points and 6.7 boards per game.

Another Harbour pair, Jordyn Maddix and Parehuia Delamere, combined for 7/13 from beyond the arc to help propel Western Texas to a 72-67 win at Howard College. Maddix finished with a season-high 19 points (5/10 3PG), plus five rebounds whilst Delamere had a tidy 10 points (4/5FG), four rebounds and a couple of steals.

Kaitlin Burgess led all scorers with 23 points, making five from seven from beyond the arc, as Southern Idaho College made easy work of Colorado Northwestern winning 84-50. It was the seventh double-figure outing in twelve games for the former Rangitoto College guard.