Leanne Walker’s basketball career has gone all the way to becoming one the great New Zealand Tall Ferns, which naturally led to coaching. She had a very successful 2015 where she led two teams to National Tournament victories. The first was with the Waikato National Under 15 Girls team, who were triumphant at the Girls Under 15s Nationals. Later in the year Leanne coached the St Peter’s School senior girls team, who won the prestigious National Secondary Schools Girls AA Championships.

Accepting the award for Leanne was her mother, Mere Smith. 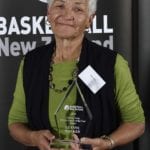