Jillian Harmon was the Tall Ferns leading scorer and fourth overall scorer at the 2017 FIBA Asia Cup, averaging 14 points per game. She also finished second overall in rebounding, pulling in 9.3 rebounds per game.

For the last decade Harmon has set the benchmark for consistent forward play for the Tall Ferns. She currently plies her trade in the highly competitive Italian Women’s Serie A1 League with Napoli. In 2017 she played for Le Mura Lucca who won the Serie A1 Championship, sweeping Pala Tagliate three games to none. Jillian averaged 17.2 points, 6.7 rebounds and 2.1 steals per game. Her scoring numbers placed her third in the league for points per game. 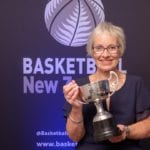