This was a very special team as they are the only New Zealand national team, men’s or women’s, to have beaten Australia 3-0 in a series – the first women’s series to be played under FIBA international rules.

The powerful Australian team, captained by future Hall of Famer Lorraine Eilers, had competed at the 1957 World Championships in Brazil, so to beat them convincingly the following year was a remarkable performance.

The leading New Zealand players in the series were Alma Coulson, Anita Hannen, Irone Brough, Beverley Green and a name many of you will be familiar with, Lois Muir. The youngest member of the team was 20-year-old Maureen McDermott-Watts who top-scored on the tour averaging 10.3 ppg – remembering the 3-point line wouldn’t be introduced to international basketball for another 26 years!

Five of the ’58 team would go on to play Australia in another three-game series in 1960. Australia won the opener 45-28, but New Zealand bounced back to win the second test 36-30 before going down in the decider 45-32.

This ‘special’ team achieved something unique in New Zealand international basketball history and are worthy recipients of Hall of Fame status. 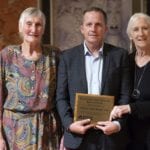