As an 18 year old in 1949, Baldwin made the Nelson Representative team and played for the region for the following 14 years.  In 1957 he joined the New Zealand Team (now known as the Tall Blacks) and was awarded the New Zealand Guards Trophy in the same year for best forward in New Zealand basketball. Baldwin was a member of the New Zealand team through to 1962, finishing his time as a player with a six week tour through South East Asia, New Zealand Basketball’s first major overseas tour.  Frank was still playing basketball in the 1960’s but had also become a talented referee, serving as New Zealand’s referee on the 1967 New Zealand Men’s tour of Australia.

In the late 1960’s Baldwin, along with a passionate group of Nelson basketballers, built Nelsons own basketball stadium, a New Zealand first.  It was named the Jack Robbins Memorial Stadium and was opened in 1971. It still serves the Nelson community today.  In the 1970’s Frank also served as the Manager of the New Zealand Men’s Basketball team, making him and Sir Lance Cross the only people to have represented New Zealand as a player, referee and manager.

In addition to his basketball accolades, Baldwin was also a successful businessman, City councillor and as Chief Executive was responsible for the reforms of the Nelson and Wellington Harbour Boards, and the New Zealand and Australian Civil Aviation Authorities.  These are just some of the many projects that Baldwin was involved in.

Baldwin passed away in March 2013.  His award was accepted by Baldwin’s children Tony Baldwin and Raewyn Baldwin-Denton. 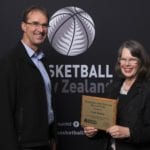