Peter Murray’s story is one of true inspiration and a reminder of what can be achieved through sheer perseverance. His impact extends far beyond the deaf community and his influence on the entire basketball community cannot be understated.

Murray’s early experiences in basketball were as a player. He joined the Auckland Deaf Basketball Club in 1959. He went on to play for the Auckland Association at representative level and represented New Zealand at the Olympic Games for the Deaf in 1965.

Murray retired as a player in 1981 to concentrate on refereeing where he would make his mark. In the same year he founded the New Zealand Deaf Basketball Association. Through the 1980’s Murray worked his way up the refereeing ranks and in 1989 reached a number of milestones. He was awarded Life Membership of the Auckland Deaf Basketball Association after serving as President for 25 years. He also became the first deaf referee to officiate on a hearing-abled international men’s game between Yugoslavia and Waitemata.

In 1996 Murray was promoted to the NZ NBL referee’s panel, the first deaf referee to achieve this status.

Through the early 2000’s Peter established himself on the international stage. In 2005 he was invited to referee at the Deaflympics in Melbourne, the same event he had attended as a player 40 years ago. He was invited to a number of international referee seminars and in 2007 was appointed a Board member of the International Deaf Basketball Association. 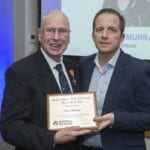