Gavin Zimmerman has been involved in basketball officiating for almost 30 years since beginning his refereeing career in New Plymouth.

He was appointed to the Women’s National League Panel in 1994 and the Men’s NBL Panel two years later. He has since gone on to referee 290 New Zealand NBL games placing him seventh on the all-time list of NBL refereeing appearances.

He moved to Christchurch in 1999 and won his first Canterbury Basketball Official of the Year Award in 2001.

Zimmerman passed his FIBA badge in 2009 and since then has refereed at FIBA Tournaments in Australia, Korea, Bosnia Herzegovina and Thailand as well as in New Zealand. In 2015 he refereed the Tall Ferns v Australia FIBA Olympic Qualifying game and earlier in the same year the Tall Ferns v Japan series. 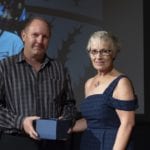