Charlisse Leger-Walker receives the McLoughlin Trophy for a remarkable third year in a row.

2018 was another outstanding year for Charlisse, as she became the youngest ever Tall Fern when helping New Zealand claim a bronze medal at the Gold Coast Commonwealth Games.

Charlisse also represented New Zealand at two FIBA pinnacle age-group events last year. She was part of the New Zealand U18 team at the FIBA Asian Championships in India and also led the NZ team at the U17 FIBA World Cup in Belarus – New Zealand’s first ever appearance at a Women’s FIBA Age-Group World Cup. She was the fourth highest individual scorer at the World Cup, averaging 15 points per game.

Charlisse was also dominant in the domestic season, leading Waikato to two national championships at the U19 and U23 tournaments and claiming MVP at both.

She collected her third MVP award at the Schick Secondary Schools National Championship, where she led St Peter’s School Cambridge to its third title in four years.

Finally, she was named to the Women’s Basketball Championship (WBC) All-Star Five and also named WBC Junior Player of the Year in 2018. 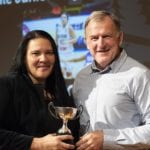