This award is presented to someone who has previously been inducted into the Hall of Fame and has achieved ‘legend’ status.

Anita Hannen began her basketball career in 1946 in Nelson. As a young girl, she was selected in the Nelson team that would go on to compete at the 1946 National Outdoor Basketball Championships. This would be the beginning of a distinguished career that included many milestones.

She went on to represent New Zealand over a 10 year period from 1950 through until 1961. Anita was a member of the first New Zealand women’s team to tour Australia in 1958. The team played 13 games over a three-week period, winning 11 of those. They recorded three test wins over Australia, playing games in Melbourne, Hobart and Adelaide.

In 1963, Hannen moved to Dunedin where she still played the game, however more and more of her time was dedicated to her four young children. Hannen and the family then moved back to Nelson in 1967 and after playing just the one game, she was convinced her playing days were up.

Hannen is a member of the Basketball New Zealand Hall of Fame and one of our most iconic female players. 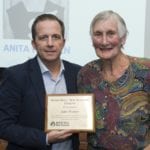