Wendy Workman became involved in basketball in Palmerston North and has devoted 57 years to the game.

Workman began volunteering when she was 16 years old, the following year she joined the local basketball association committee.

After moving to Palmerston North, Workman continued to offer her services to the game. She began as a player, then went on to coach and manage teams in the Manawatu region.

Workman has assisted as a referee, score bench official, administrator, committee secretary and treasurer. She also became the President of the Palmerston North Basketball Association where she helped take the Association from a position of significant debt to a point of stability.

An influential member of the Cheetah Girls’ Basketball Club, Workman helped the club grow to become one of the largest in the region. She was instrumental in running primary and secondary school competitions, and is still actively involved in referee and score bench training. 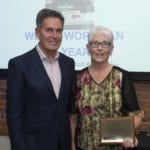