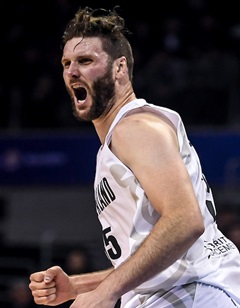 Was a member of the bronze medal winning team at the 2018 Commonwealth Games averaging 4.8ppg and 4.8rpg.

He was a member of the Tall Blacks team that beat Australia to win the 2009 FIBA Oceania Championships averaging 15.5 points and 9.5 rebounds per game.

After nine seasons with the NZ Breakers during which he became the club’s all-time leading shot blocker and second behind Mika Vukona in the rebounding category he joined Melbourne United in 2018.. One of only three players to have played on all four Breakers Australian NBL championship winning teams.

Has won NZNBL titles in 2009 with Waikato Pistons, 2012 with Auckland Pirates and 2018 with Southland Sharks. Averaged 12.9 points and 7.5 rebounds for the Sharks in the 2018 championship winning season.