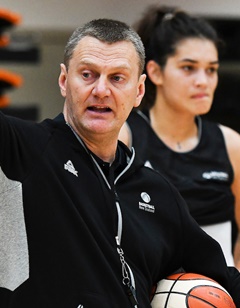 Molloy was appointed Tall Ferns Head Coach ahead of the 2018 Commonwealth Games after a spell as associate coach in 2017. Took the team to a bronze medal in his first tournament as head coach and followed up with gold medal success at the William Jones Cup in July 2018 and silver at the 2019 Cup.

Molloy brings a wealth of experience to the Tall Ferns programme having held a variety of positions in the Australian NBL and WNBL. In addition he has held positions with various Australian national teams most recently the Junior Men’s team that won silver at the 2012 FIBA U17 World Championships in Lithuania.

The 2013 WNBL Coach of the Year, Molloy is currently head coach of the Melbourne Boomers – 2018 WNBL Finalists and 2019 semi-finalists.