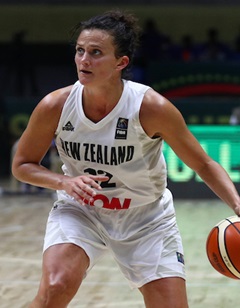 Debuted for the Tall Ferns in 2008 and appeared at the Beijing Olympics in the same year.

Played all 6 games for the Tall Ferns at the FIBA Asia Cup in 2017 averaging 14 points and 9.3 rebounds per game.

After graduating from school Harmon played four years at Stanford University playing 136 games for the Cardinals.

Was a key player for Le Mura Lucca in its 2016-17 Italian League Championship winning season (averaging 17.2ppg and 6.7rpg). Most recently played for 2018-19 season beaten finalists Ragusa averaging 14 points and 8 rebounds per game.

Other than the 2014-15 season Harmon has spent nine seasons playing professionally in Italy.

Won a WNBL championship in that 2014-15 season playing for Townsville Fire alongside Micaela Cocks. She made it a championship double by guiding Otago Goldrush to the WBC title later in 2015.