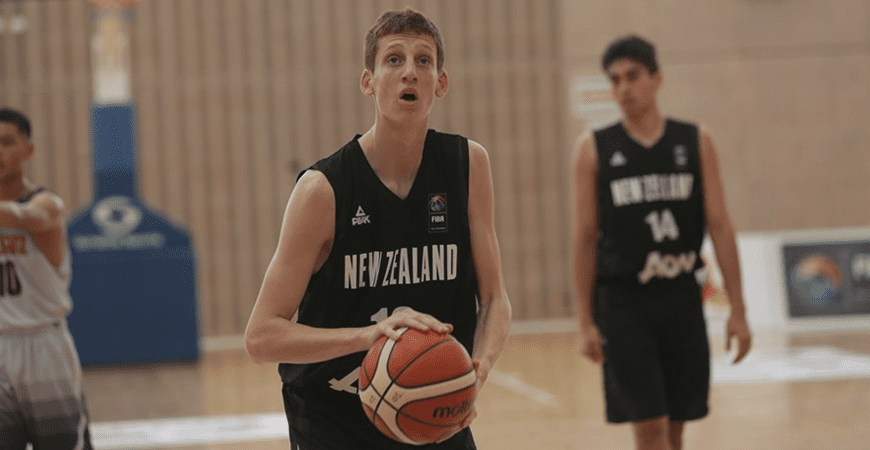 Prior to Covid-19 Lockdown, former Tawa College and Wellington standout Ben Gold was living the dream at the NBA Global Academy in Canberra – the first Kiwi to be selected to the Academy that is based at the Australian Institute of Sport.

The NBA Global Academy serves as a global hub for top international prospects from around the world.

It employs a holistic, 360-degree approach to player development with focuses on education, leadership, character development and life skills.

The NBA Academies build on the league’s existing grassroots programming, including Basketball Without Borders (BWB) – the NBA and the International Basketball Federation’s (FIBA) global basketball development and community outreach program – that has seen more than 50 former campers make it to the NBA.

Through Basketball New Zealand, a trio of Kiwi players were invited to try out for the Academy in October. Gold was invited back for a second trial in November. That opportunity involved a two-week all-expenses-paid trip to Las Vegas.

He obviously made a strong impression as he was offered one of just over a dozen scholarships to the Academy.

“I’m the only player from New Zealand. Half the players are from Australia, but there are also a couple from China, another from Brazil, an Egyptian and two more players from Africa,” Ben Gold says.

The youngster headed to Canberra in February, forgoing his final year at Tawa College. He was enjoying the student-athlete lifestyle and facilities available in Canberra, living just 200 metres from the practice court was a dream come true.

“Also, as we are staying on the campus, being able to shoot whenever you want to and get in those extra reps is hugely beneficial.”

Not averse to putting in the hard yards on the practice court, Gold was putting up close to 3500 shots a week, on top of regular training sessions.

Ben’s father Rob has been delighted with the communication and care that has been forthcoming from the Academy.

“We’ve been really impressed with the support Ben has had at the Academy. They have his welfare and schooling at the front and then the basketball follows on from that.

“We would also like to acknowledge the support we have had from BBNZ in accommodating Ben’s needs,” Rob added.

Unfortunately, all the good work the various parties had put in ground to a halt in March as the Covid-19 pandemic brought sport around the world on hold.

Ben returned home to Porirua just before New Zealand closed its borders. He has since been studying online ahead of a projected return to Canberra for the beginning of term three in July.

In the meantime, Gold has been training with older brothers Thomas and Sam, who are handy players in their own right.

Thomas was training with the Wellington Saints before lockdown and Sam is in his final year at Tawa College playing for their premier team.

Ben also missed the opportunity to represent New Zealand on the international stage. He was named in the New Zealand team scheduled to play at the 2020 FIBA Under-16 Asia Championships in Lebanon in April, but that tournament was cancelled due to COVID-19.

Fortunately, he has had the opportunity to represent his country previously, as he played at the FIBA Under-15 Oceania Championships in Port Moresby in 2018.  He was a prominent player at that competition and helped the team record an outstanding 59-57 win over Australia.

Wellington couldn’t repeat that success in 2019, finishing third, but Gold did have the consolation of being named to the Tournament Team.

“I have a high appreciation for guys that want to play their role, want to win and are willing to work to expand their role in the team and Ben Gold exemplifies all of those qualities,” King says.

King envisages a fine future for the 6’9 swingman.

“With his size, length and versatility, he could become one of New Zealand’s best two-way players.

“Ben is a ‘Grab and Go Guy’, get the rebound off the glass and start the break. He is also a quality shooter from beyond the three-point line.

“Ben’s greatest impact on the court is the intangible things that he consistently does; he is a great team-mate; a willing communicator and he has a strong desire to win.

“Ben comes from a super supportive family. His parents Sharon and Rob and have been great to work with and they have his best interest at heart,” King added.

Gold’s ambition is to play at the highest level possible.

“I definitely want to go to college in the States first and then, beyond that, play in the NBA or any professional basketball league overseas. I’d also love to play for the Tall Blacks in the future.”

As the sole Kiwi at the NBA Global Academy, he is the perfect ambassador for New Zealand, forging a path that others will be able to tread in the future.