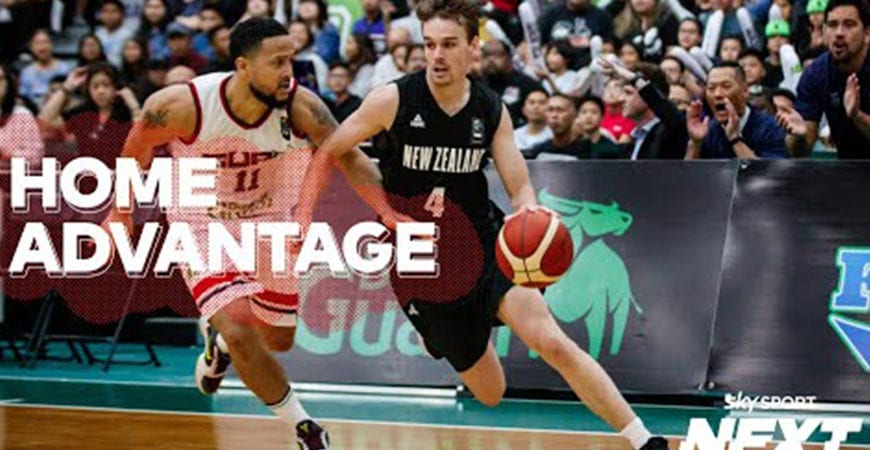 Tall Blacks Jarrod Kenny and Taylor Britt were expecting to be tipping off the Sal’s NBL about now and looking to cement their Tall Blacks selection for the tour of Japan, Poland, Germany and finishing with the Olympic Qualifying Tournament (OQT) in Serbia. Now they are at home like the rest of us.

The 2020 Sal’s NBL was set to be New Zealand’s biggest, with a record number of games televised and another year of record crowds. Of course, COVID-19 has put a temporary stop to both the NBL and the Olympics.

Kenny, one the Tall Blacks veterans at 34 years old, had just finished a strong Australian NBL season and is in top form. He helped take the Cairns Taipans to the Final Four this season and says the Tall Blacks were always in his thoughts as he focused on his performance.

“The Tall Blacks were setting up for a big month in June. The Olympic Qualifying Tournament was our big shot and we were lining up to give it everything,” says Kenny.

The Tall Blacks were looking at bringing a full-strength unit to the Serbian OQT. The stars were aligning as they were looking to peak, pushing on from beating Australia in February and also coming off their FIBA World Cup successes where they secured big victories over higher-ranked Turkey, Montenegro, and Japan, not to mention the oh-so-close performance against power-house Brazil.

Despite the COVID-19 roadblock, the players are not sitting idle. In partnership with the New Zealand Sport Collective, Sky Sport and Basketball New Zealand, Kenny, Britt and Tall Fern Micaela Cocks, have produced a series of online skills and drills using their smartphones. It will be part of a multi-sport project called Home Advantage, also featuring Football, Volleyball, Squash and Touch.

“The drills are for anyone, from a beginner to someone who has plenty of experience playing,” says Kenny.

“The course will help sharpen your skills, get the blood flowing, and keep your body in tune to basketball. You can’t just go around the road to the gym right now, so doing something like this will help keep you interested, stay fit, and to hone those essential skills. It’s great for your mental health too, it gets the endorphins flowing. Once you pick that ball up, you can lose yourself in the fun of it.

“And if you have ambitions to play at a higher level, these drills are good for you too. Working hard on those fundamentals will help you become a better all-round player,” says Kenny.

Working for youth is not unfamiliar to Tall Ferns Micaela Cocks. When not playing hoops, she works for ‘Project Booyah’, an award-winning programme where she works with at-risk youth in Townsville, Australia.

“We take teenage boys and girls, who are disengaged from school, for a 16-week programme to help them. Most of the teenagers have been through some sort of trauma, they are not into book-work so we help them in other ways with their education.”

Cocks is a three-time Australian WNBL Championship winner with the Townsville Fire. She won the 2015 Australian WNBL Grand Final MVP Award in the three-game Grand Final Series. This year she finished her ninth consecutive season with the Fire. Amazingly, she has won the Fire’s ‘Players’ Player Award’ a record four times, and has also been made a Life Member of the club.

Like most professional athletes in the world, Cocks routines have changed due to the Coronavirus outbreak. Whilst the Covid-19 restrictions in Australia are not as tight as New Zealand, all sport is cancelled and working arrangements have altered. Cocks did one of the first videos on her own facebook page, before the project was formalised with Sky Sport.

“My sister, who lives in Auckland, gave me the idea. She follows a live workout stream on Facebook and suggested I do something similar for the kids. The more I thought about it, the more I realised it was a good idea. After I had done the first one, I got heaps of messages from people who liked the content and wanted more.

“My advice at this time is to stay active and try to get a little bit of routine in your day. These drills are something anyone can practice at home – just go at your own pace”

Cocks is an Olympian, Commonwealth Games medallist, New Zealand’s most-capped Tall Ferns of all time with 128 games, and one of New Zealand’s best 3×3 players, having won a Gold medal at the FIBA Asia Cup in China in 2018.

The skills will be shown on the Sky Sport Next YouTube channel, with new skills set to be released once a week for the next four weeks. You can see all the sports’ Home Advantage assests here: https://www.youtube.com/channel/UCaOvfE-4N9pm_36a2NYB8yw