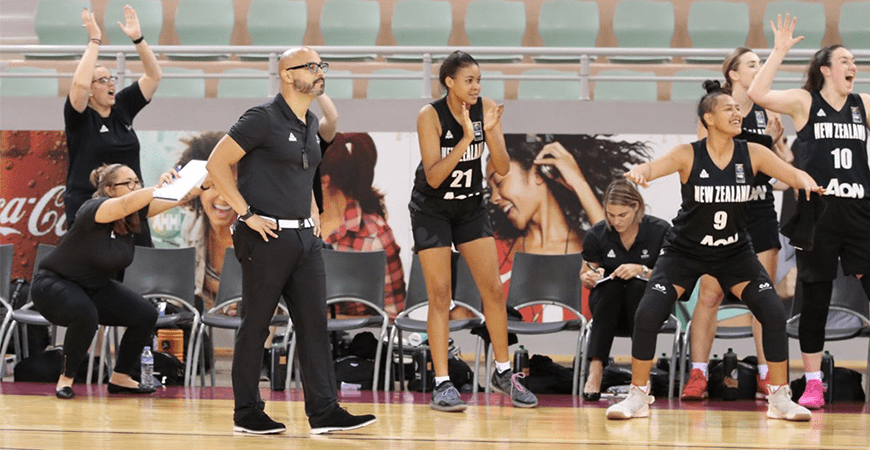 After a sluggish start, the Aon Under 17 Women beat Samoa 84-26 at the FIBA Under 17 Oceania Championship in New Caledonia on Friday evening.

The win also confirms New Zealand’s place at the FIBA Under 18 Asian Championship in 2020 where they will be the Oceania representatives alongside Australia.

New Zealand Head Coach Hernando Planells, unhappy with the effort of his starting five, subbed the quintet out of the game just 93 seconds after tip-off.

After falling behind 3-0 Chynelle Marama opened the scoring for the Kiwis who took a narrow 12-8 lead into the quarter time break.

Harbour guard Jess Moors converted her own steal into a transition basket as New Zealand started the second quarter in a far better fashion than the first.

Another steal by Moors resulted in an easy basket for Olivia Williams – the pressure defence from the Kiwis reaping dividends as they moved into a 22-8 lead.

Ashlee Strawbridge added to the Samoan woes by nailing a couple of threes as New Zealand scored 28 unanswered points. Another three from Caitlin O’Connell meant that New Zealand took a 46-12 lead into the locker room at half-time.

Moors and the Williams pairing of Arielle and Olivia inflicted further damage on Samoa in the opening minutes of the second half. The trio combined for the first 15 points made by the Kiwis in the spell to establish a commanding 61-17 advantage.

In a bizarre incident that followed a successful Ella Paleaae-Cook free throw New Zealand mistaking in-bounded the ball under the attacking basket and began advancing the ball in the wrong direction before the referees intervened.

Normal service soon resumed with Hannah Matehaere, who was having a strong game, taking New Zealand to a 71-20 three-quarter time lead.

The scoring slowed in the final period as Coach Planells experimented with some different line-ups and strategies. Forward Sophie Adams enjoyed some extended court time claiming 7 points in the quarter as New Zealand now look ahead to a rematch with Australia.

The gold medal game will be on Saturday (6.00pm NZT) after Australia outclassed Tahiti in the first semi-final.