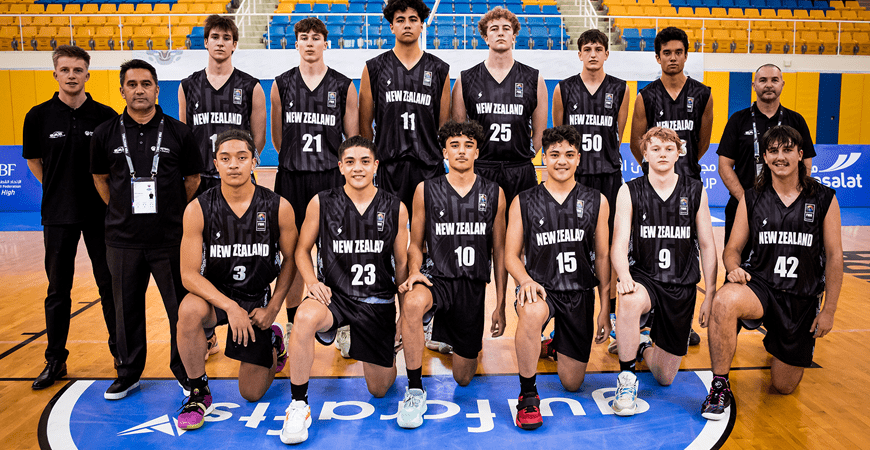 The U17 Men’s National Team began its FIBA Asia Cup campaign with a convincing 92-67 victory against Kazakhstan in Doha, Qatar on Sunday night in the opening game of the tournament.

Forwards Nic Book and Julius Halaifonua troubled Kazakhstan all game with both their scoring and rebounding capabilities. Harbour representative Halaifonua completed a double-double of 22 points and 10 rebounds, five of the rebounds at the offensive end.

Those opening ten minutes highlighted the difference in playing styles of the two teams.

Kazakhstan put up 13 threes in the first ten minutes (making 3). In comparison the Kiwis made just 1 from 6 attempts from deep, preferring to take the ball inside where they scored 12 points in the paint – 8 of those from Halaifonua.

Halaifonua scored the first seven NZ points in the second frame, one a two handed dunk.

The Kiwis transition game was troubling the Kazaks, Dante Matakatea stretching the lead to eight (34-26) before the Trego brothers Hunter and Phoenix scored in quick succession to push the advantage out to 43-30 six minutes into the spell.

Book joined Halaifonua in double figures as New Zealand carried a 49-34 lead into the locker room at half-time.

Book added a dozen to his tally and George Grant knocked down a corner three to open his international account as New Zealand improved their advantage to 69-50 at the three-quarter mark.

Kaia Berridge and William Passi made transition baskets, Brody Perry knocked down a three and Kalid Petzer but down a dunk as the Kiwis comfortably navigated their way through the fourth quarter to ease to a first up win.

Next up for the Kiwis is a Tuesday night (10.30pm NZT) meeting with Korea. With a FIBA World Ranking of #30 compared with New Zealand’s #27 the Koreans, medallists in three of the five U16 Asia Championships played to date, will present a formidable challenge for Coach Darron Larsen and his charges.

*Dates and times of play-off games will be dependent on the results of the two Pool games.

The 13-team Tournament, postponed from 2021 due to Covid, doubles as a Qualifying Tournament for the U17 Men’s FIBA World Cup to be played in Spain in July – the top four teams in Doha will qualify for the Word Cup.

The U16 Asia Cup fixture schedule can be found here. Live streaming will also be available on this link: