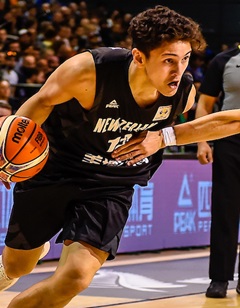 Debuted for Tall Blacks against Jordan in September 2018

Ahead of his freshman year at the University of South Dakota Perrott-Hunt has played in the NZ NBL for the Nelson Giants in 2019 averaging 12.1 points per game in his rookie season.

He was a key member of the Rosmini team that won back-to-back Schick Secondary Schools National Championships in 2017 and 2018.

Played for New Zealand at the 2018 FIBA U18 Asian Championship in Bangkok averaging 13.7 points and 6.9 rebounds per game. New Zealand won a silver medal at the tournament to qualify for the 2019 FIBA World Cup in Crete, Greece where he averaged 11.3 points, 5 rebounds and 3.4 assists.