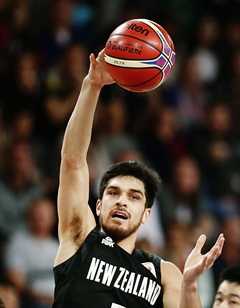 Played outstandingly well in the  victory against Australia in Brisbane in February 2020 posting 21 points, 6 rebounds and 5 assists.

Averaged 10.4 points and 5.0 assists during the 2019 FIBA World Cup in China – led the Tall Blacks in assists at the tournament.

Was a member of the bronze medal winning team at the 2018 Commonwealth Games averaging 13.2ppg and 4.6apg. Scored 23 points in the semi-final loss to Canada.

Was named in the Tournament Team at the 2017 FIBA Asia Cup after an outstanding tournament in which he averaged 15.4 points and 5.8 assists per game.

Ili has the distinction of winning four New Zealand NBL titles having won in 2015 with the Southland Sharks and 2016, 2017 and 2019 with Wellington Saints. Named to the NBL All-Star Five in 2019.

Ili won the 2017-18 Australian NBL Most Improved Player Award in 2018 playing for the NZ Breakers. Spent five seasons with the NZ Breakers before signing with Melbourne United for the 2019/20 season.