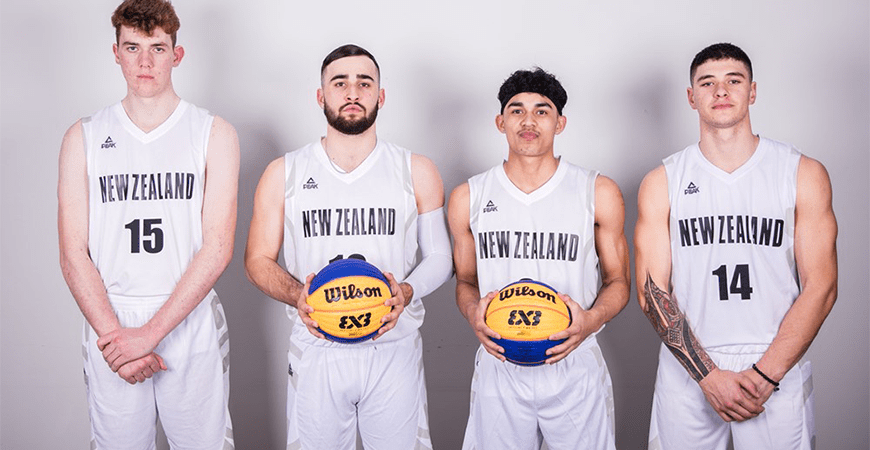 The National Under 18 3×3 Men has gone undefeated through pool play in the FIBA U18 3×3 Asia Cup after securing back-to-back wins against Sri Lanka and Mongolia in Malaysia this evening.

Their first encounter was against Sri Lanka and the men in black made light work of their foes with a 21-4 win. Marvin Williams-Dunn was the only one not score, with Shalom Broughton, Mitchell Dance and Thomas Webley all collecting close to half a dozen points each.

They used their physicality to their advantage and bullied their way to the rim for easy shots around the basket. Dance scored the game’s first four points before Webley checked himself in to the game and threw down a two-handed slam with his first touch of the ball.

Sri Lanka didn’t score until the deficit hit just under double-figures, struggling to shoot it from the perimeter. The dry-spell was broken on a floater off of a missed rebound but this wouldn’t catalyse a comeback for Sri Lanka, with New Zealand then replying with another five straight points.

Over the next five minutes, the teams traded blows with neither team showing much interest in contesting long jumpers. Sri Lanka scored the games only two-pointer, while Shalom Broughton had the game’s top highlight after cutting to the rim and throwing down a wicked dunk. The game finished with two minutes left on the clock, giving the two sides a little added rest.

An hour later the National team took on Mongolia and this time the match went right down to the wire. New Zealand led in the early stages thanks to points inside from Dance and Webley, but their foes were equal to the task and kept the game with one possession.

The teams were evenly matched for height, which meant the game was going to come down to a difference in either shooting or strength. The Kiwis drove to the cup just as they did 60 minutes beforehand, only to be met by the long limbs of a Mongolian defending the rim.

Neither side could miss a shot for a two-minute stretch, which Mongolia used to twist the game in their favour after successive twos. The scoreboard read 16-15 at that stage and it took a Webley free throw trip a minute later to regain the lead for New Zealand.

Dance scored on the ensuing possession, which was then followed by a score to the opposition and then finally closed out by two Williams-Dunn freebies after the guard had been intentionally fouled. The final score was 19-17 and with the win, they secured top spot in pool B.

The quartet will play the runner’s up of pool D on Saturday at 7:20pm (NZST) which will either be Australia, Kazakhstan or Kyrgyzstan.

Tune in to the link below tomorrow at 6:50pm (NZST) to catch the Under 18 Women take on India and then Turkmenistan at 8:20pm (NZST).

All of the matches are streaming live here.