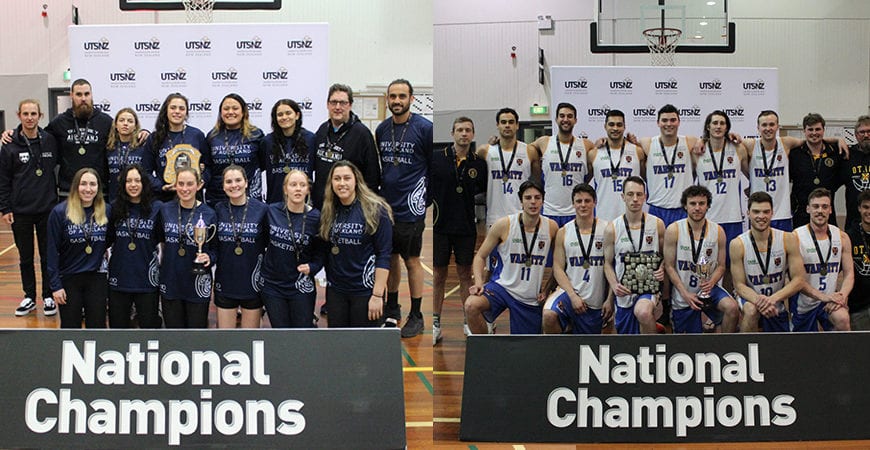 The men’s grand final was an illustration of the extra resources being put into basketball at academic institutions throughout New Zealand. After winning the trophy for the first time last year, Mitch Langton’s team upped the ante – bringing extra support in the form of a massage therapist and trainer to help get their athletes approaching the competition in as professional a manner as possible. With the Otago Nuggets approved to join the Sal’s NBL in 2021, the University of Otago (UO) men’s team has taken the on the role of getting potential players for the Nuggets as acclimated to high-level basketball as they can.

The start of the game couldn’t have gone any better for the 2018 champs, racing out to a quick 6-0 lead over the University of Canterbury Falcons (UC). Jacob Mulholland struck back by rattling off five quick points for UC, as they took their first lead of the game. Rohan Russo played a strong roll, with one of his layups pushing US to a 20-12 lead late in the first quarter, giving the 2017 champs visions of hoisting the shield again.

Otago’s Point Guard and eventual member of the tournament team, Darcy Knox, was unstoppable in transition, going on his own 7-0 run to put Otago back in front. Both teams traded buckets evenly into the third quarter and tied at 50 apiece. Otago’s Sam Colenutt showed off his exceptional athleticism – with arguably the play of the tournament occurring during a 12-0 run as he went high above the rim and followed up a Matthew Bardsley miss, by flushing it down for two points.

Piet Van Hasselt quickly called timeout to try and quell the surging Otago momentum, but it took almost another three minutes of game action before the Falcons scored again. By this time they were on the wrong side of a 66-52 scoreline. Once the fourth quarter started, UC were 16 points behind. The Falcons did do enough to give themselves a chance – trimming the Otago lead to nine with just under five minutes to play. They caught a break, as Colenutt, who had been almost unstoppable on the offensive glass, fouled out, and UC’s rebounding issues were suddenly resolved.

After a desperate UC run cutting the lead to only five with 90 seconds to play, UO’s Darcy Knox calmly took over the game, drilling a three to give Otago some breathing room. A five point possession helped UC regain a glimmer of hope, but again it was Knox closing the door – rebounding a UC Free-Throw and then sinking his own ensuing attempts. Otago University the deserved winners in a thrilling battle 92-86, and the right to take the shield back down to Dunedin with them.

Mitch Langton reflected on the defending the title – which was somewhat bittersweet on a personal level for him as he is moving from Dunedin later this year: “It’s a huge credit to the men for committing to the team, knowing they had to pay more than most of the other the teams from the North Island to attend due to support from their respective universities.

“Our preparation was good, the team dedicated themselves to coming back and trying to make Otago a dynasty in the University competition and I think we are getting there.
“It’s great to leave on a high, and to hopefully leave some systems that will help with the team being successful in the future. Over half the team staying for next year, will no doubt be a huge help for the incoming coach.”

The women’s grand final pitted both teams hailing from Auckland against each other – a change for previous years with Lincoln University’s past dominance.

AUT had won the pool play match earlier in the tournament against Auckland, after Thale Messel hit two clutch three-pointers to erase a late University of Auckland’ (UofA) seven-point lead. Unfortunately for AUT, Messel was unavailable for the more important rematch after sustaining a knee injury during the tournament.

The tempo of the final started with both teams being extremely wary of their opponents, and mindful to try and avoid their star players getting into any sort of foul trouble. A 14-11 first quarter did not see much of an offensive improvement in the second frame, as the two teams combined for only 21 points here, with both teams’ defensive schemes making life very difficult for their opponents.

University of Auckland employed a 2-3 zone for nearly the entirety of the match, and this frustrated the AUT offense – their star guard Tiarna Clark was held to eight points on 2/13 from the field. This wasn’t AUT’s biggest problem though – Annabelle Jenkins was forced to sit large portions of the game due to foul trouble, managing just over 14 minutes time spent on court. Fortunately for the team in black, Mele Latu capably stepped in off the bench – scoring both inside and outside the arc, as well as providing some size on the defensive end.

AUT’s Summer Jean Motufoua scored the final two points of the half, after getting her own offensive rebound and alertly putting the shot back up just before the buzzer sounded – putting AUT only two points adrift of the nominal underdogs.

Like the men’s game, both teams traded baskets after the break, and it looked like the defensive questions had begun to be answered by both sides – the scores locked at 37-37 near the end of the third quarter. The final 150 seconds of the third quarter belonged to Auckland Tournament team member Georgia Henare, with nine of her 11 total points scored before AUT could respond whatsoever on the scoreboard. Clarke did her best – swiping the ball from Bailey Gavin, and then finishing off the break by going behind her back in traffic to a wide-open Tabitha Jenkins at the rim, cutting the UofA lead to three as we entered the final stanza.

Tournament MVP Oliva Berry was instrumental building a ten-point lead for Auckland to start the fourth, dominating the entire quarter by scoring eight points, and Breana Jones seeming to score a much needed bucket whenever Berry didn’t. AUT did close the gap to only three points, with over two minutes to play. Auckland took the air out of the ball, frustrating AUT into six empty possessions to close out the game – winning by the final margin of 57-49.

The University of Auckland Head Coach Karl Noyer couldn’t have been happier for his team: “I’m very proud of the way the girls played. We had a great team culture from the get go, so we knew we were in for a good tournament. We had already lost to AUT in pool play, so needed revenge in the final, after a very hard fought semi-final against Lincoln. A lot of the women are returning next year so we are looking forward to defending our title in 2020.”