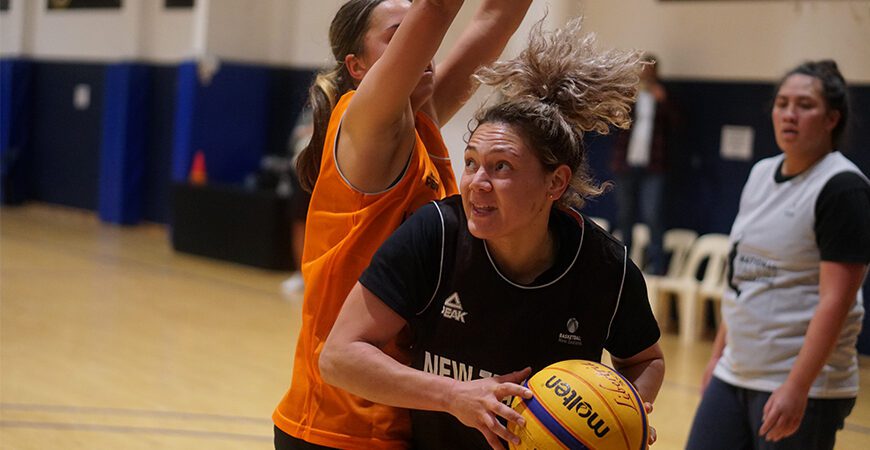 The growth in popularity for 3×3 basketball has led to greater levels of participation across the country, so much so that it’s called for more competitions.

It is the biggest female three-a-side basketball tournament in Aotearoa and has already seen the likes of Charlisse Leger-Walker, Ella Fotu and Lauryn Hippolite suiting up to play.

“We see the 3×3 discipline of Basketball as the fastest way for a New Zealand representative Basketball teams to claim a Gold medal at an Olympic Games.

“In our rich and proud Tall Blacks and Tall Ferns history, New Zealand has never won a medal at an Olympic Games or a World Championship.

“In a relatively short international competition history for 3×3, New Zealand has twice been crowned world champions and we have won several medals at World Cup events. Our investment in 3×3 at the high-performance level is to achieve a podium finish at pinnacle events.

As mentioned, the initiative gives female players an opportunity to hone their skills, but it also helps attain ranking points to qualify for the 2022 Commonwealth Games in Birmingham, United Kingdom.

The bigger the tournament (player attendance) or the more tournaments you run, the more ranking points you earn.

There have been three events run so far, all in Auckland, with an average of 48 players per outing. The hoopers aren’t the only important figures in attendance though.

Senior Women’s 3×3 Head Coach Justine Reed has overseen all of the tournaments and hopes to see more of them run outside the City of Sails.

“Competitions like the Seven Stars provide great preparation for everyone from our 3×3 Tall Ferns down to the youngsters coming through the ranks.

“We were able to hold a camp with a long list of athletes we’re considering for national selection off the back of the last tournament, which allowed for us to have an even greater look at them on court.

“It’s a win-win for us as coaches when more of these types of events are held – more FIBA ranking points and fierce competition for the athletes.”

Basketball New Zealand is scheduled to run the next Seven Stars Initiative, this time for men and women, in Christchurch from Friday 1 October to Sunday 3 October.

King says he and his team have a number of plans in place to help cater the growing number of athletes interested in the shortened version of basketball.

“3×3 is an exciting, fast paced new format of the game and its future looks bright. The growth of the sport remains at a remarkable pace in New Zealand with a 35% percent increase in the number of teams entered at our recent Schools National tournament earlier in the year.

“Tokyo 2020 saw the first Olympic medals in this version of the sport while 3×3 has also been added to the program for the upcoming Commonwealth Games. There are also signs that 3×3 will be on the Olympic programme in Paris (2024).

“We are really high on the 3×3, this version of the sport allows a smaller federation, those with limited resources, to compete on equal footing with more populated countries.