Taranaki and Wellington win the Aon Under 17 National Basketball Championships 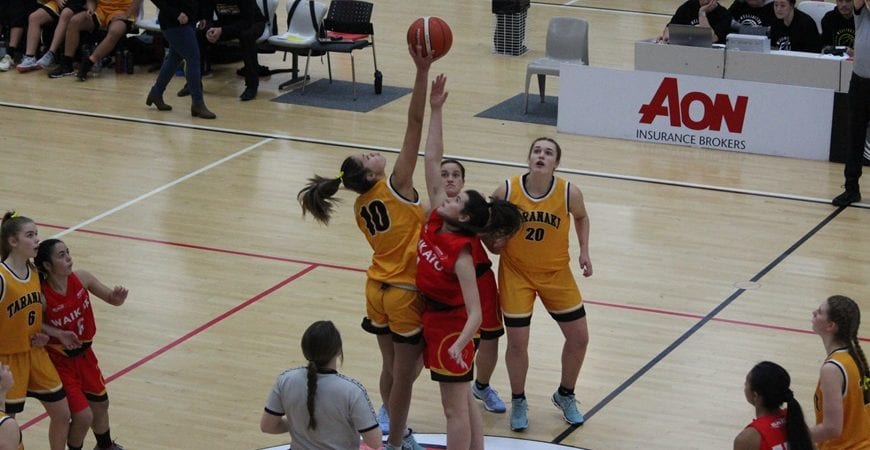 The winners of the Under 17 Aon National Basketball Championships have been crowned this evening in Wellington.

Taranaki have won the girls’ title, while Wellington has won the boys’.

The spectators at ASB Stadium in Wellington were treated to some fantastic basketball, with final two minutes of both games filled with compelling and competitive ball. Neither of the eventual winners feeling safe until the final buzzer sounded.

Waikato came out determined to give Taranaki everything they could, assuring their opponents that the fight for the gold medals would not be anywhere near as easy as the pool game during the week where Taranaki won 60-36.

Coach Anthony Corban’s smaller Waikato team worked extremely hard all over the court on defence. They extended their pressure all the way past the three-point line when Taranaki was in the half court, and constantly challenged Raquel Sampson in the post.

Reese Anderson’s fingerprints were all over the scoring early for Waikato hitting two straight threes, and finding Tyler Mitchell for an open jumper to build a six-point lead. Both teams had their chances in the dying seconds of the quarter, with breakaway opportunities for each finalist falling awry thanks to fantastic hustle from each side.

Taranaki began tightening the screws in the second quarter, holding Waikato to only seven points in the ten-minute period. A great high-low pass from Emily Poole to Sampson tied the game at 22-22, and forced Corban to call a timeout to settle his troops. Alix Blyde upped her defensive game for Taranaki instead, getting two straight steals to help her team start off on an 8-0 run. Tiaan Owen capped that off when she grabbed an offensive rebound from a missed Free Throw and scored it. This bucket gave her Taranaki team a 30-23 lead at the half.

Jayze Lee Waihi picked up her fourth personal foul with 3:49 remaining in the third quarter and her Waikato team faced at a twelve-point deficit. Sampson scored again to push their advantage to 14, before Quaye Walker-Eketone and Breeje Schuler both hit shots from behind the arc to close the Taranaki lead to 48-41 at the end of the third.

Taranaki’s switching defence kept making life difficult for the Waikato team in the final quarter, as tough runners were the only shot that Corban’s team could consistently find. With only four minutes to go, Shay Haira’s team was up 62-48. After an 11-2 run for Waikato where Schuler and Walker-Eketone again hit a pair of three-point shots, Haira called a timeout to settle her team with 1:27 remaining. After running the elevator action from the sideline, Sampson alertly ducked in and scored inside for Taranaki. A late Waihi three wasn’t enough to alter the final outcome for her team, as the overjoyed Taranaki team began mobbing each other on the court having seized the championship.

A clear battle of styles was on display in the boys’ Grand Final – the home Wellington team looking to up the pace as much as possible on defence, while looking for efficient shots on offence as often as possible. Auckland in contrast, was a much more methodical team, wanting to use the gravity inside that Robert Coman provided to move the ball and attack closeouts.

It wasn’t all shots near the rim for Coman in the game, who opened the scoring with a nice pick and pop jumper for three. After taking a few possessions to get going, Wellington found their groove with their patented full court pressure. They utilised Tafara Gapare’s length at the top of the press to cut down both the passing angles, and vision for the Auckland team. Auckland’s confidence gradually improved against the pressure as the quarter progressed, and Coman was able to convert an out of bounds alley-oop lay-in to give his team 21-23 lead at the end of the first.

Gapare had one of the most impressive dunks when he raced up the court after intercepting an errant pass against their press early in the second. This was immediately followed by another Auckland turnover and Jason Crummer called timeout to calm his team before they became flustered from the defensive pressure. Coach Crummer was rewarded with some excellent ball movement from his team, as Sataan Tawera knocked down a big three off an extra pass to push Auckland ahead 34-40. Wellington replied with a 15 to 2 run, with Ben Gold and Emmerson Kavakura both contributing five points each. Tawera answered with a three of his own to see the teams heading into halftime with Wellington ahead by four points.

Foul trouble hurt Auckland in the third quarter, with both Coman and Tawera relegated to the bench after picking up their third foul each before the midway point. Both teams traded baskets before Wellington was able to edge ahead courtesy of the free throw line. Ezrah Vaigafa closed out the quarter with a quick jab-step and drive, finishing around the challenge at the rim from Tyson Kempton, and winning a 66-62 lead.

The threes started flowing in the final quarter, Connor Ngan hitting three after his defenders would go to double team Coman in the post, leaving a wide open look each time he received the kick-out pass. Back to back possessions saw Ngan’s hot shooting tie the game up at 84-84, compelling Terry Stallworth to call timeout for his Wellington team with 2:52 remaining on the clock. Coman briefly gave his team the lead with a three of his own, but Gapare had no hesitation in answering in kind immediately, snatching a two-point lead back for Wellington. Neither team was able to score a field goal in the final sixty seconds – despite looks for both teams right at the rim. Wellington outscoring Auckland from the charity stripe 4-1 to walk out as National Champions after a thrilling five-point win.

“We wanted to play a fast paced and intense game, with a high number of shot opportunities. We had measures to test if we were playing this way, and each player competed against himself to ensure we all played this way together. We believe this game proved our belief that defence ignites offence,” said Coach Stallworth.

Livestream
Watch the replays of both games at www.NZ.basketball/video-archive