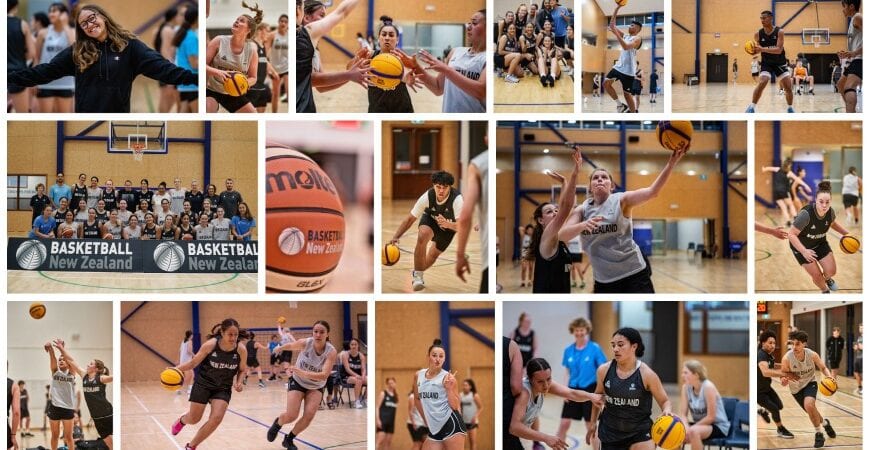 Close to 100 of the country’s most promising basketballers gathered in Auckland this past week as part of Basketball New Zealand’s Age Group Development Camp.

Staged at Saint Kentigern College, the All New Zealand Camp catered for identified athletes in the Under 15 and Under 19 age groups, and put them through their paces under the watchful eyes of representative coaches.

Junior Tall Blacks Assistant Coach, Matt Lacey, said the camp was a great opportunity to get back into the National Team environment after what has been a long and disrupted year.

“All of us involved were eager to get back on court and reconnect with one another knowing that we hadn’t been together since February.

“This camp presented a unique opportunity for us as a coaching staff to coach and evaluate two age groups after the U17 boys team did not end up playing in their World Cup this past July. We were able to re-engage with those athletes that have been committed to our programme over the past two-years as well as welcome in a new crop of talent as we head into the final stage of our three-year cycle.

“Overall the camp was hugely positive. The players competed fiercely and maintained a high level of intensity over the course of the three days. We were able to implement key aspects of our system, teach core parts of our National Style of Play as well as provide a skill development facet to the experience as well,” said Lacey.

Under 15 New Zealand Boys’ Head Coach Mel Downer says the camp was an opportunity to give athletes an insight into the demands of elite performances.

“Players leave the camp with a greater understanding of what it takes to be a High Performance elite-level athlete as well as having a greater appreciation of what it means to wear the black singlet.

“All of those who took part in both age groups have the ambition to play basketball at a very high level and so it was our job to point them in the right direction and for them to follow that path. We’re glad we had the chance to meet with so many athletes before seeing the year out, to get a gage of where they’re at both on and off the court,” says Downer.

The camp started with the athletes undertaking physical testing, including testing on athletic ability, movement competencies, and height and length. They also competed in a National 3X3 age group competition on top of the five-aside format on-court sessions which focused on implementing the national style of play.

Off the court, various educational lessons were put on to explain the importance of getting it right away from the hardwood and upskilling them on how to look after themselves like a professional. This included team-bonding activities, nutrition, recovery discussions and future pathways seminars.

Come the end of the two three-day camps, all players were given three levels of individual feedback on their performance at the camp clarifying where they think their strengths lie and areas in which the athlete could improve to take that next step forward.

New Zealand Under 15 Girls Head Coach Lori McDaniel says the one-on-ones at the conclusion of the camp are vital to a player’s progression.

“We have individual chats with the athletes about things we want them to work on with it all coming back to our national style of play.

“Those same messages are relayed to their associations and then local coaches, which then puts everyone on the same page. This doesn’t necessarily mean their high school coach or rep coach has to put them in position to just focus on what we’ve outlined, it’s more so that everyone is aware of what we’d like to see from that player at the next camp,” says McDaniel.

Basketball New Zealand will be running a series of regional identification camps in February of 2021.  These camps will mark the first activity for those athletes born in the year 2004 and are eligible for our next Junior Tall Blacks and Junior Tall Ferns program.

The 2021 camps are currently scheduled to be held on the following dates and locations:

More on the Basketball New Zealand age-group pathway can be found here.