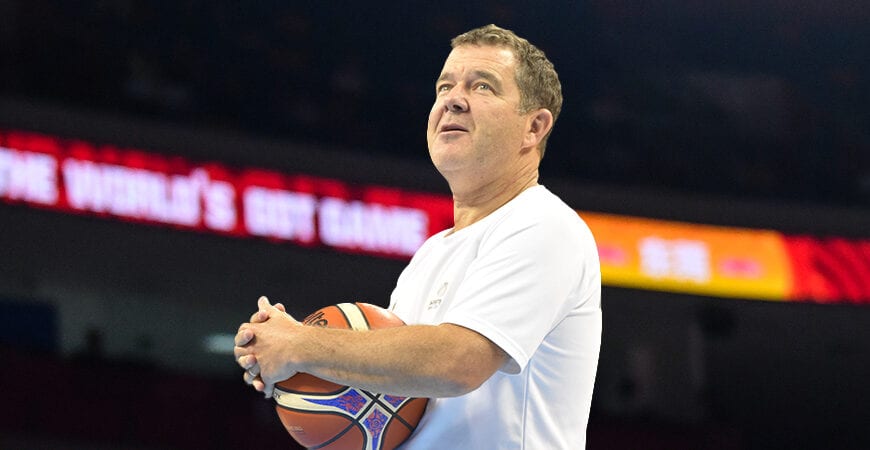 Long-standing Manager Andrew Dewhurst has called time on his involvement with the Tall Blacks as he looks to find his feet in his latest venture in the sport of golf.

The well-known PR man, event expert and commentator served as the person behind the scenes for the senior men’s national basketball side from 2015 to 2020, working alongside Head Coach Paul Henare and then Pero Cameron in a number of notable international series, including the 2017 FIBA Asia Cup and 2019 FIBA World Cup in China.

Dewhurst says he feels very fortunate to have been a part of the Tall Blacks staff and looks back on his time with the side with fond memories.

“It’s hard to describe what it’s like to be a part of the Tall Blacks if you haven’t experienced it, but if you ask anyone that has, the closest you’ll get to putting it into words is things like ‘family’ and ‘special’.

“I’ve met so many great people, forged lifelong relationships and travelled to parts of the world I wouldn’t have had it not been for the Tall Blacks, and for all those things I am truly blessed and thankful.

“It was very tough having to make this decision [to resigning], but it’s time to start a new chapter and let the next person soak up all the wonderful experiences and learnings that come with the position.”

His path to his role with the Tall Blacks came after a 14-year stint in various roles with the Breakers, a time in which they claimed four NBL championships.

Dewhurst says had it not been for the relationships he formed at his time with the club, he likely wouldn’t have had the honour of working with the national team.

“I’ll never forget how it all played out. I was on my way back from a media opportunity with Paul Henare for the Breakers, I was handling their media and he’d just been appointed as the Head Coach for the Tall Blacks.

“We were chatting away and he mentioned his new gig, adding how he was trying to figure out what he was going to do for a manager – then he just looked across at me and said ‘why don’t you do it?’

“It was crazy because it was one of those big decisions that I had to talk to my family about, but from the moment he said it I knew I was going to do it.”

Dewhurst had no previous experience as a national representative manager (or any team for that matter), but with a wealth of media experience and an eager attitude to learn, he’d go on to establish himself as a vital cog in the national set up.

“What I love most about the Tall Blacks is how everyone operates to deliver beyond expectation. Whether a coach, player or member of the support staff or HP team at Basketball New Zealand, everyone sacrifices and works so hard for the good of the team.

“There have been tough times and occasions where it didn’t go to plan, however, no one complained and they just got on with it. It was those repeated displays of perseverance that made the team so special to be a part of and made the work that much more rewarding.”

Stepping in to fill the shoes of the long-standing manager is basketball commentator and media personality Huw Beynon. Beynon will be under no illusion of how demanding his new role is, but Dewhurst offered some advice to help his successor transition in smoothly.

“Fresh eyes on the team and culture is going to be a good thing, but build that trust. It’s a role that is 100% reliant on trust. Trust with the players, trust with the coaches and trust with the national body. I learned that from my predecessor in Claire Dallison, she was one of the first to show me what the Tall Blacks culture was all about. I only hope I have left the team in as good a shape for Huw as it was when she handed the role to me.”

Fiercely proud of the team and what they have achieved, Dewhurst hopes that the next generation will be better recognised for the world class team they are.

“It is a bit of a long and ongoing saga, the question of recognition for not only the Tall Blacks, but basketball in a wider sense. I only wish some of those decision makers and people in influential roles in the New Zealand sporting industry could have been with us and have seen how revered this team is offshore, particularly throughout Asia.

“Everywhere we go the Tall Blacks are the number one billing, at times even at the expense of the home team. The passion we bring to the floor and the humility off it makes us a unique proposition. But most importantly this team is world class and as shown over many decades now, can and will compete with the best on the planet with scant regard for reputation or pay packets.”

“Andrew’s time with the Tall Blacks and in his other roles with Basketball New Zealand were great years. He played a big part in helping keep the Tall Blacks thrive in a time when the new FIBA World Cup competition was put in place. Always reliable, on point, and exceptionally passionate about the team and the game. We wish him all the very best with his new endeavors. I know the comms team at BBNZ are still hoping to snag AD for commentary duties when they can, so we will still get to see AD at the occasional event which will be great – he’s a top asset to any sport or organisation.”