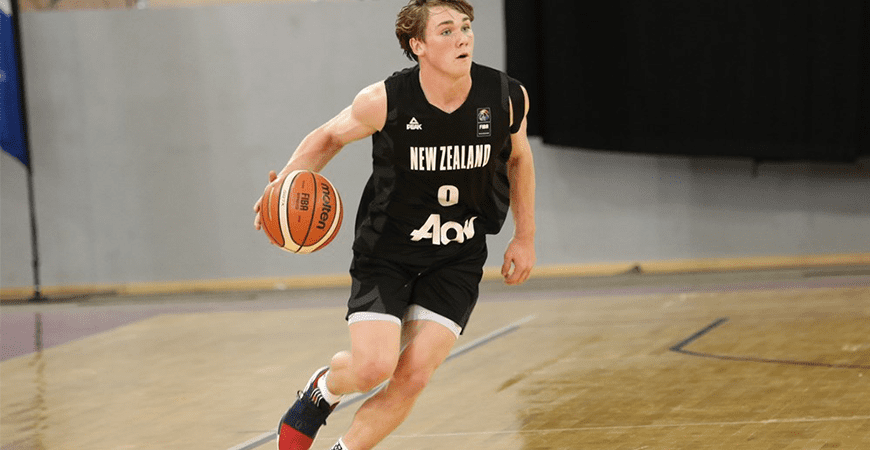 The Aon Under 17 Men finished pool play in the FIBA Under 17 Oceania Championship with an 86-63 loss to competition favourites Australia in L’Arène du Sud this afternoon.

A fast start for New Zealand saw them shoot out to an early 9-5 lead, with both Reihana Topia and Robbie Coman draining three-point jumpers. Australia’s lethargicness saw their coach switch their defensive gameplan to a press, swinging momentum in their favour and tying the contest at nine all by the seven-minute mark.

The two teams exchanged shots to lift the score to 11 apiece, but Australia then scored 10 unanswered points and finished the quarter on a 16-2 run to take a 27-13 lead at the first break.

Poor ball handling and passing from New Zealand made for two-thirds of the Australians point total through the opening period, who repeatedly tried to dribble down the sidelines and paid heavily for their decision-making.

Conor Ngan opened the second with a long triple, only to have his shot superseded by yet another run from his opposition. Four of Australia’s players got off the mark through the first two quarters, with Josh Giddey hitting double-figures well before the half’s end.

New Zealand struggled to find their groove on both ends of the floor, even when Australia reverted their defence back to halfcourt, and trailed 45-28 at the main interval. Coman and Topia were the only Kiwi players who looked somewhat comfortable with ball in hand, while the Australians had eight of their 10 players put points on the board.

A 17-point buffer to start the second half grew to 25 by its close, as Australia continued to exploit defensive lapses. Their pressure on the ball took precious seconds off of the Kiwi’s shot clock and their length allowed them to contest most looks.

Harrison Payne was one of the few positives taken away from today’s game. In the final two minutes of the third period, he scored his team’s final eight points, the highlight being the rarely seen four-point play.

The 25-point hole New Zealand needed to dig themselves out of was always going to be a tall task and to their credit, their attitude didn’t slip. They won the final quarter at 17-15, finishing what was a tough day at the office on a high.

Their two wins in their previous two encounters gave them the day off tomorrow, where they will have to wait for the results of a quarter-final fixture to see who they play in the semis on Friday at 8pm.