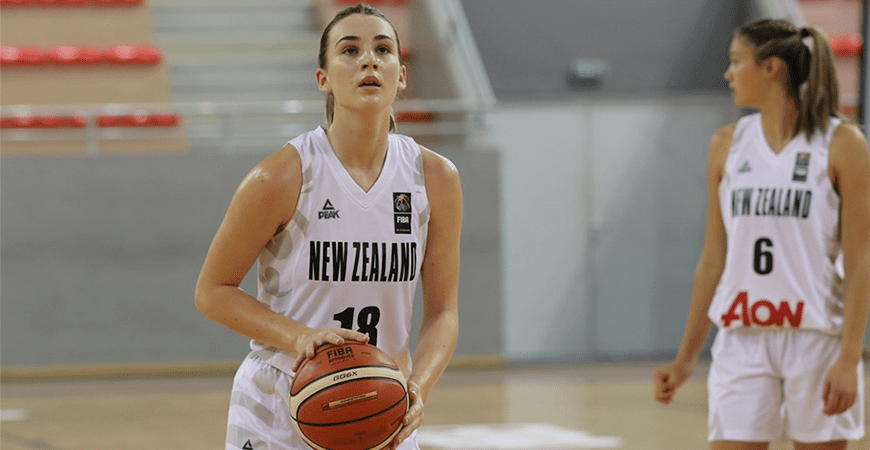 The Aon Under 17 Women have gone two from three in the group stages of the FIBA Under 17 Oceania Championship after losing 79-53 to Australia in L’Arène du Sud this afternoon.

Australia scored the first five points of the game but New Zealand answered back with five of their own. The staunch defensive contest saw both teams go scoreless for the next two minutes, with an Arielle Williams three giving the Kiwis their first lead.

The Green and Gold stormed back in front by contributing 15 of the next 23 points, giving themselves a six-point advantage at the end of the first 10 minutes. Much like their male counterparts, the Australians hung their hat on defence, exerting a significant amount of energy on their end of the floor.

Their enthusiasm in playing without the ball carried over to the second period although it was New Zealand who seemed to have the rub of the green early. Australia’s buffer shrunk to a one-possession game a minute before the halfway mark, with forward Ella Paleaae Cook scoring all four of her points in that space of time.

Sadly a three-point deficit was as close as they would get for the entire game. Australia’s Kelsey Rees led the way as her team rocketed back out to a big lead, scoring eight points in as many minutes. Her effort was followed up by guard Kate Deeble’s five points and three assists. They led 43-30 after two-quarters of play.

New Zealand only gave up two points in the first five minutes of the new half, giving themselves an opportunity to wrestle back ahead. After letting Australia score the first two points, the next nine points were assigned to their side of the scoreboard. At that point, there were only eight points between the pair, and it was New Zealand who was in possession of the ball with a chance to cut it closer.

The next play proved pivotal in the outcome of the match, as Deeble’s timely steal on a pass to open shooter turned into an outlet pass for teammate Rees, who calmly laid the ball in the basket for two more. The two teams exchanged shots for the remainder of the quarter and it ended in New Zealand winning the 10-minute duel 14-11, but they still trailed by 10 going into the fourth.

Points were hard to come by for the Kiwis in the closing period, who only mustered a single triple in the first four minutes. Australia was thankful for the lack of production and stretched the difference to 19, sealing a third successive win.

New Zealand scored another six points before the final buzzer, while their foes tacked on 13. The women are now having to wait until Friday for their next game, where they will play the winner of the first qualifying final at 6pm.