Ashlee Strawbridge settles into life playing college basketball in the US 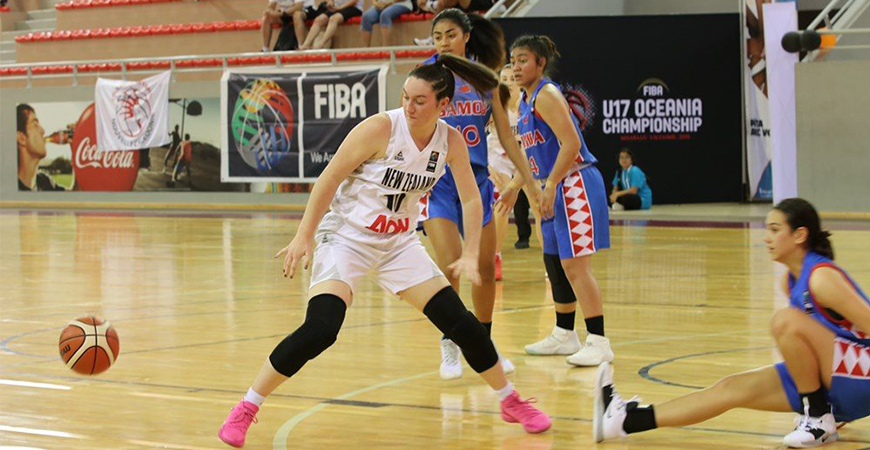 Rising basketballer and future Tall Fern, Ashlee Strawbridge, is adjusting to life in the United States after recently touching down to take up her basketball scholarship with the College of Southern Idaho (CSI).

Strawbridge is one of over 50 Kiwi women on basketball scholarships in the States. She’s set to take to the court alongside fellow New Zealanders Kaitlin Burgess and Kyra Paniora.

They will be playing for the CSI Southern Eagles in the Scenic West Athletic Conference. A long way from her hometown of Ashburton, the 18-year-old had little hesitation in choosing Southern Idaho and says she is settling well in her new surroundings

“The coach [Randy Rogers] and the culture here are excellent, and with other international students on the team I knew it would be a good environment for me.

“It has been amazing in these first weeks just getting to know new people. I’m working towards a business degree and school is really fun here.

“It was nice to finally get into a routine and get back in to school after a year off.”

Despite the start of the college basketball season being delayed, team training is in full swing.

“We are training every day and doing weights as well. Everything is made just a little more difficult as we have to wear masks.”

Her 2020 season in the US follows what was a hugely successful 2019 for the young forward. It’s not often a player wins a medal at a FIBA International Tournament in both 3×3 and 5v5 in the same year, but she did just that.

In June last year she travelled with Charlisse Leger-Walker, Tayla Dalton and Sharne Pupuke-Robati to Mongolia where the team excelled at the FIBA Under 18 3×3 World Cup.

The New Zealand team went all the way to the final beating Poland, Russia, Hungary, Japan and China along the way. The Kiwis lost 21-15 to USA in the final but it was a remarkable performance by the New Zealand quartet that had taken the scalp of several women’s basketball powerhouses during the tournament.

Two months later, Strawbridge played on the New Zealand team that won silver at the FIBA Under 17 Oceania Championships in New Caledonia. She averaged 9 points along 3.8 rebounds per game and was comfortably the best three-point shooter on the team making 5 from 7 at 71%.

Whilst she enjoys both formats of the game, Ashlee believes the shortened format suits her strengths.

“I personally prefer the style of 3×3 as it is a quicker game and the pace is more suited for my style of basketball.

“The experience in Mongolia at the Under 19 World Cup and winning a silver medal are the highlights of my basketball career so far.”

Strawbridge was named to the 2020 Junior Tall Ferns for a tour of China but, unfortunately due to the COVID-19, that tour was postponed.

“Ashlee is tough, strong and plays relentlessly in every part of the game. She is a tremendous rebounder, can shoot the three and has really showed tremendous leadership at her position.”

Compensation for her came when she was named in the 24-player squad that attended a Tall Ferns Camp in July and played in the televised Showcase between Team Davidson and Team Beck.

Attending that camp in her role as Basketball New Zealand Talent Manager and long-time coach Mel Downer, who says she has been mightily impressed with the way the youngster’s game has developed.

“Ashlee is a versatile athlete with the ability to play on the wing or in the post. She is a strong finisher in traffic, utilising her strength to her advantage.

“She is an extremely hard worker at both ends of the floor, constantly putting her body on the line to take chest blows, chase down rebounds, win dead ball situations and force deflections.

“Ashlee is also fantastic person off the court – happy, bubbly, kind and funny – and is an absolute pleasure to coach and be around!”

Strawbridge herself thoroughly enjoyed her week-long involvement with the Tall Ferns.

“It was such an amazing learning experience and an honour to get the opportunity to play with and learn from women I’ve been looking up to since I started basketball. It was a good week in preparation to start my college experience.”

The success she’s had hasn’t come about by chance. She has been dedicated to improving her game evidenced by her desire to attend early morning training sessions with Mainland Eagles on top of her other commitments to school and representative teams over the past five years.

Strawbridge began playing basketball in Year 7 at school and almost immediately began attending Canterbury Basketball Association skill sessions such was her enthusiasm for the game.

Her talents soon became evident and further highlighted when she was named to the Tournament Team after Canterbury Country beat North Harbour to claim the 2014 Under 13 National title.

After initially attending Ashburton College, she moved to Rangi Ruru Girls’ School for her final two years of high school.

Her presence in the senior team had a hugely positive affect, with the team finishing runners-up in the Canterbury Secondary Schools Whelan Trophy competition in her first year before claiming the trophy 12 months later.

She says numerous people have influenced her basketball journey and she is grateful to them all for helping her achieve her goals.

“There are way too many people to mention but mostly just the coaches and people behind the scenes who pushed me when times got tough and made trainings fun to show up to. Lori McDaniel, Mark Douglas and Kat Wills are three people I’d like to mention but there are many others.”

She isn’t looking too far ahead but says playing for the Tall Ferns is a major ambition.

“That is a major goal and even further on from that, become a coach and give back.”

Strawbridge and her new group of team-mates have been forced to wait for a season-opener date amidst the pandemic, but will use the time up their sleeve to get themselves ready for whatever waits.