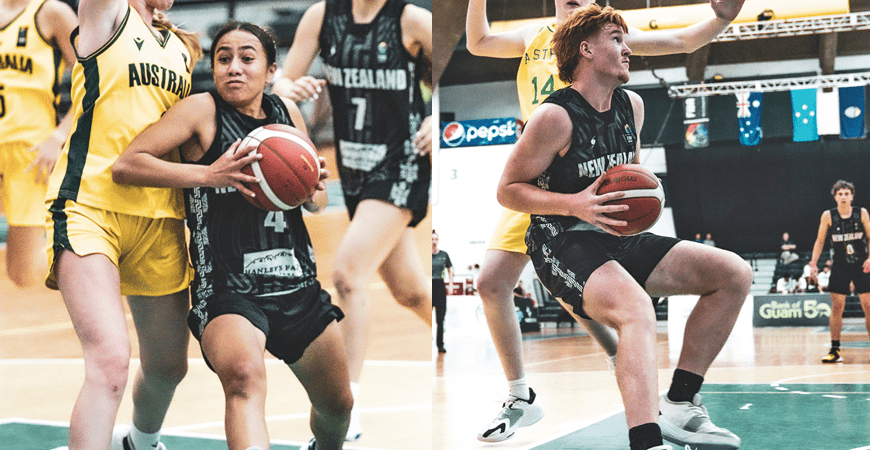 The New Zealand Under 15 boys and girls teams have returned to Aotearoa this week, following a successful campaign in Guam at the FIBA U15 Oceania Championships.

Both teams progressed through to the finals of the Oceania Champs, earning silver against a pair of powerful Australian U15 teams. Most importantly, they each earned a place in the FIBA U16 Asian Championships in 2023, bringing them one step closer to their ultimate goal – the U17 World Champs in 2024.

In the first final, The NZ U15 Girls team fell 54-100 to a powerhouse Australian side. With the scores tied at 17 apiece early in the second quarter, the Aussies went on an impressive 29-9 run to build a 20-point lead heading into the break. Australia held the Kiwis to 28% shooting from the field; their sheer size helping them earn a 66-43 advantage on the boards.

The Kiwis were led by Bailey Flavell’s 19 points on 9/15 shooting in her best showing of the tournament, Pahlyss Hokianga-Heather the only other Kiwi in double figures with 10 – along with 9 rebounds & 4 assists in a typical all-around effort. Sophia Hickey and Zenthia Stowers also chipped in with 6 points each.

In the boy’s final, the NZ U15 Boys team were beaten 85-74 by a hot-shooting Australia, in a game which was much closer than indicated by the final score; both teams tied at 60 apiece in the fourth, before the Aussies pulled ahead with a 10-0 run in the final minutes to put the game out of reach.

Following the tournament, three Kiwis were named to the All-Star Five tournament team; Hokianga-Heather named to the Girl’s team while Goodman and Jones were chosen for the men’s squad.

Hokianga-Heather averaged 15.8ppg (5th best) along with 7.4 rebounds, 5.2 assists (3rd best) and 4.8 steals (3rd best); twice coming within distance of a rare quadruple double during the tournament. She scored a personal-best 27 points in a 74-54 semi-final win over Samoa.

6’6” Goodman had averages of 11ppg on 52.3% shooting (3rd best), along with 5.8 rebounds and 1.8 blocks (3rd best). Goodman’s best showing of the tournament came versus Australia during pool play, when he amassed 22 points, 7 rebounds and a pair of blocks.

Other Kiwis also featured prominently in the final tournament statistics, with Lachlan Crate leading the entire comp in blocks – averaging 1.8 per game in only 20 minutes of action. And Merrick Rillstone was a dominant force in Guam, averaging 19ppg (5th best), 7.6 rebounds and 2.6 assists (5th best); the 6’4” forward also third overall in Efficiency (20).

“Although we didn’t beat Australia in the Finals, it’s still a fantastic showing overall that the players, coaches and their families can all be proud of,” says Boucher.

“Coming into this event we had targeted a top-two finish for both teams – which qualifies us for the U16 Asian Championships next year – so we’re very happy to achieve this result.

“For me this is an exciting time, because we’re showing Aotearoa and the rest of the world that New Zealand has some incredible talent coming up through the ranks; athletes who at 15 years old already have many of the tools to be successful, so it’ll be exciting to see them continue to develop and grow during this cycle.

“For many of these players this is the start of a basketball journey that – with hard work and dedication – could see them as future Tall Ferns and Tall Blacks, with the opportunity to attend US Colleges on scholarship or build a professional career in a domestic or overseas league. We look forward to watching, and supporting, their basketball journeys with interest.”