Di Robertson has recently retired from the Basketball Hawke’s Bay board. During her 14 years of service since its inception in 2006, Robertson played key roles in the area of player and coach development, strategic planning, rules and regulations, and, most importantly, the women’s game.

As a player she played over 40 games for the Tall Ferns during her six-year career, captaining the team in 1984. She was part of the bronze medal winning team at the Commonwealth Games in 1983. She enjoyed phenomenal success on the domestic stage, winning seven titles with Hawke’s Bay during a career that spanned over 300 games.

Robertson also coached the Hawke’s Bay Women’s team for three years. Fittingly, in 2010, she became the first basketballer, male or female, to be inducted into the Hawkes Bay Sports Hall of Fame. 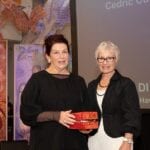