Glen Denham debuted for the New Zealand Men’s team in 1984 as an 18-year-old. At the time, he was the second youngest debutant after Stan Hill.

After appearing at the 1986 FIBA World Championship in Spain, he went on to captain the Tall Blacks for a remarkable 13 years, playing 169 games – 53 of those Test matches.

A former Kings High School, Dunedin, Head Boy he was inducted into the school’s Wall of Fame in 2015.

He captained the school’s basketball team to the Secondary Schools National Final against Church College in 1982 and wasn’t a bad cricketer either scoring a century against Shirley Boys in his senior year at Kings.

Denham played for the Otago University team in the early 1980’s while studying for a Bachelor of Teaching.

Denham made his NBL debut in 1986 for the Waikato Pistons, before moving to play for the Canterbury Rams, winning championships in 1989 and 1990.

He moved back to Dunedin in 1991 and played 10 seasons for the Nuggets in two stints. His 50-point haul against North Harbour in June 1993 remains a franchise record. 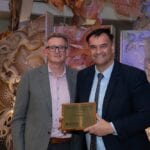