Keith Mair’s involvement with coaching started 48 years ago in the Hutt Valley.  His involvement spans every level of coaching, from club teams, Secondary School teams, Rep teams, the NZ NBL’s Canterbury Rams and the Hawkes Bay Hawks, and at the international level.  He was the Assistant Coach for the 1980 Senior Women’s Team and the New Zealand Junior Men’s Team Coach from 1980 to 1983.  He was also Assistant Coach from 1984 to 1987 for the New Zealand Senior Men’s  team.

Mair also oversaw the first win over a US Division One College team in 1994, wins against the Netherlands, Cuba, Czech Republic (twice) and Canada.  Under his direction as head coach, the Tall Blacks won the William Jones Cup Tournament in Taiwan in 2000. In the same year he took the team to Sydney where they were the first New Zealand men’s team to make an appearance at an Olympic games.

Mair was member of the Basketball New Zealand board for 18 years, including six years as Vice President.  He was also Head of Sport Development for the ‘Hillary Commission for Sport, Fitness and Leisure’ from 1988 to 2002 and the Chief Executive of England Basketball from 2003 to 2013. 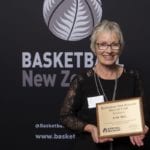