2019 was a busy one for Charlisse Leger-Walker. She attended the prestigious, invite-only, Basketball Without Borders Global Camp in the US in February, before heading off to Greece with her school team, St Peter’s College Cambridge, in April to compete at the ISF World Schools Basketball Championships.

In June, Leger-Walker was part of the silver medal winning team at the FIBA 3×3 U18 World Cup in Mongolia, before suiting up for the Tall Ferns in Japan and Taiwan. She played all seven internationals on tour, and helped the Tall Ferns finish runners-up at the William Jones Cup.

The FIBA Asia Cup was next, in Bangalore, India, where the Tall Ferns finished fifth. 48 hours later, Leger-Walker was in Palmerston North to help her school win their fourth Schick Secondary Schools National Championship title in five years, where she won her fourth MVP award.

Next on the agenda as a trip to Auckland, this time to represent the Tall Ferns at home in the FIBA Olympic Qualifying Tournament. All of this was achieved while she was also Head Girl at St Peter’s School, Cambridge.

Accepting the award on Charlisse’s behalf is her mother, Leanne Walker. 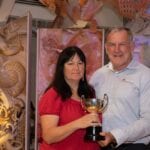 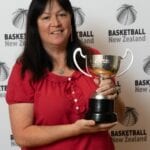