Jeff Olsen has given a remarkable 50 years’ service to Harbour Basketball.

He was one of the founding members of Harbour Basketball upon its incorporation in 1972, although his involvement on the board controlling North Shore basketball dates back to 1967.

Jeff began playing basketball at Westlake Boys in the ‘60s and went on to represent Harbour before turning his attention to coaching.

A past president of the NZ basketball Coaches Association he guided the Harbour U20 Men’s team to the national title in 1974 – Harbour’s first National Championship.

He has served as president, secretary and treasurer during his extensive time on the Harbour Board and helped draft the new constitution in 1998. 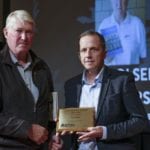