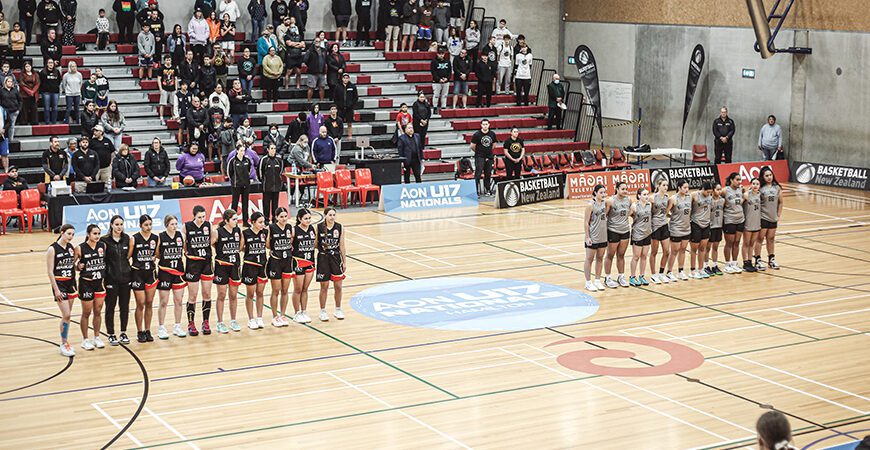 After four huge days of basketball action, the Aon U17 Nationals have come to a close and our Champions have shown their true form.

Wellington and Waikato. The last time these two met was in pool play where Waikato won 77-52. Wellington would do everything they can to ensure that they would walk away with gold. It was a tough start for the team from the Capital City, trailing 24-7 in the first quarter. Waikato started the game with 15 unanswered points, taking till Tia Pavihi drove and laid the ball up to open Wellington’s bank. Taking over five and a half minutes was not what the coaches would’ve wanted early on. Waikato restricted Wellington to 18 in the first half, scoring 50 themselves in that timeframe. By the break, Waikato had well over a 30 point lead and managed to maintain it for the rest of the game. Shakani Murray came off the bench and scored 17 points in 15 minutes, while Olivia Lassey managed to clock in 15 points and a huge  game-high 15 rebounds. Waikato managed to control the rest of the game and from then in, took over all stats on the board. Every single stat, Waikato was winning. Wellington managed to concede 29 turnovers in the game compared to Waikato’s 14. And every time the ball turned over, Waikato cashed in, scoring 30 points from turnovers alone. Waikato also made 18 steals to Wellington’s 6.

The end result, Waikato won convincingly and were crowned the Aon U17 Champions for 2022. Holding Wellington to just six points in the 4th, ensuring the final score would be a big one. 36-79.

This was bound to be a game of the ages. Canterbury made it through against Harbour after a long running, high scoring match, while Waikato A blitzed past Waikato B to create 2020’s finals all over again. Waikato made the early start, heading into the first quarter with a 26-33 lead over Canterbury, and that would be their 2nd biggest of the game. The biggest would come heading into half-time with the scores 46-54 to Waikato. With a home-advantage, Waikato fans were pouring in to support their team. Nicholas Hayward was the one to watch for Waikato, dropping 27 points and claiming 10 rebounds. Shooting at 66%, he was someone you wanted to give the ball to. Liam Davis was also putting on a shooting performance, 17 points off his 30 minutes of gametime, along with two blocks that would keep the game close and show that defence was vital to the game. Canterbury clawed back the margin to three with the score 71-74 heading into what would be a loud and fast paced final 10 minutes, and you bet it was. Hugo Gonzalez Garcia of Canterbury who nailed a game-high 29 points was shooting 60% from the floor, while his teammate Reuben Booth was feeding his team 10 offensive boards for a total of 20 rebounds in the game. The final few minutes drew closer and plays were executed. Manaia-Ariki Wharepapa would create more chances for his Canterbury team, leading the way with 6 assists and a solid 23 points which would help push Canterbury into the lead. John Anderson for Waikato would level the game up with 4.4 seconds remaining off a lovely fast break down the court. 94 a piece. Step up Garcia for Canterbury. A few spin moves later and a perfectly executed inbound pass, Garcia shoots from the free-throw line and calls game with a Buzzerbeater that sent the gold medal back down south for the second time in two years.

Final results and Team Placings will be displayed on the Aon U17 Nationals page. You can also find all of the games with LiveStats as well as the replays of select games from day three and day four.