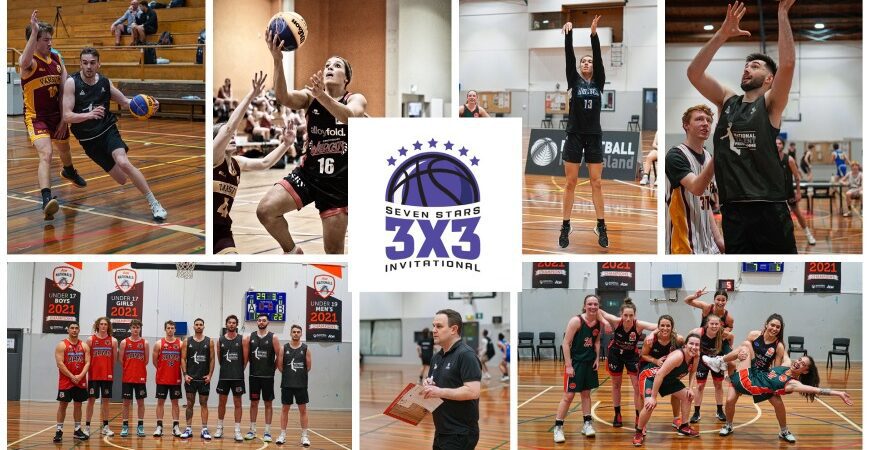 The Basketball New Zealand 3X3 Seven Stars Invitational events made a strong debut in Christchurch over the past fortnight with a showcase of some of the best South Island players in action.

The matches were well fought with a number of overtimes and 42% of the women’s games were decided by 3 points or less, and a corresponding 35% of the men’s contests.

“The Seven Stars were a perfect way to get back into 3X3, I really enjoyed the two weekends of tournaments.  It was competitive with a lot of close games.  I feel it helped a lot getting ready for 3X3 events coming up later this year including the Schick 3X3 Cup,” said Britt.

“It was awesome to see so many young ballers coming through and having to change your thinking pattern because of how fast it was and less people on the court.  Nice to have a bit of rough and tumble too! It was great getting back out on the court after a tough time for us all. Loved the banter, competitiveness and it was super fun.”

Jordan Hunt was another well-known name who is loving 3X3.

“The Seven Stars were a great opportunity to get some 3X3 basketball in during an uncertain time.  Not only was it fun and enjoyable, but also competitive, with a bunch of high-quality South Island teams participating,” said Hunt.

The Seven Stars events have earned the NZ 3X3 programme valuable country points towards qualification for the 2022 Commonwealth Games in Birmingham 28 July 28 – 8 August.  The outcome of qualification will be known by mid-November.  The events moved Pafe Momoisea and Esra McGoldrick to number one NZ rankings respectively.

“The speed and intensity of 3X3 helps our players become more aggressive off the dribble, better at finishing through contact and letting it fly from the arc. I also love the way that players find their own solutions rather than looking to the coach for answers,” said Secondary Schools Invitational Girls’ team organiser and coach Dave Harrison.

“It was tremendous to see teams develop over the two weekends and play 3X3 in the right spirit and style.  Special thanks to the Canterbury Basketball Community for coming together to make these events possible,” said 3X3 Tall Blacks men’s Coach Piet Van Hasselt.

The tournaments were possible under COVID-19 Level 2 protocols.  Special thanks to the team organisers, referees and the volunteer scorebench crew from the University of Canterbury Sport Coaching Programme.

The purpose of the Seven Stars events is to increase the number of 3X3 opportunities for New Zealand players and increase our support of the New Zealand HP 3X3 programme as we increase ranking points and build towards pinnacle events. Read about the Seven Stars Invitationals here.