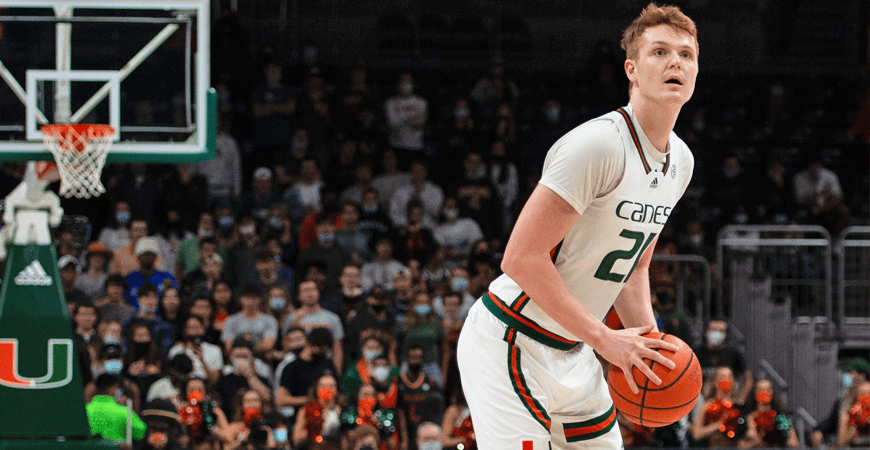 As part of a regular series, BBNZ shines the spotlight on the Kiwi athletes who are leaving their mark in collegiate basketball in the United States. This week we profile 6’10” Sam Waardenburg from Auckland’s Rangitoto College, who is currently a senior for the University of Miami Hurricanes in the ACC.

This Saturday, Sam Waardenburg will play his 100th game for the University of Miami Hurricanes against Florida State University. A century of NCAA Division I games is quite an accomplishment, especially given that he will become only the 13th Kiwi male to achieve this milestone.

Ahead of the century mark, the former Junior Tall Black is in good form – having just scored a career-high 21 points in his 99th game, an 85-57 win over North Carolina.

Having missed all of last season due to a foot injury, Waardenburg has bounced back strongly, starting in all of his 16 games for the Hurricanes in this campaign. He currently leads the team in 3-point shooting at 46% (17/37) and blocks (17).

The Hurricanes have begun the season strongly, winning 14 of their first 18 games and Waardenburg is impressed with the chemistry the team have been able to generate.

“The team do a great job of trusting one another. We have a talented team with great scorers, but those things don’t matter unless you work hard and put in the effort – and this  team is prepared to put in that effort which is a great quality we have.

“The last two or three years have been difficult at times, but this year has a different feel with the trust we have in one another.

Waardenburg says that the team’s communication is at a different level and the players are having fun.

“They want to get into the gym and that feeling is contagious. We are going to build on that.”

The 14-4 start includes 6 wins from 7 outings in the powerful Atlantic Coast Conference (ACC).

“The ACC play is fun to watch and even more fun to play in,” enthused Waardenburg.

One of those six wins was on the road at powerhouse Duke University where the 6’10” (208cm) forward had just the two points but contributed a vital 5 assists, 4 rebounds and 3 blocks in a 76-74 victory.

“Sam Waardenburg helps us spread the wealth,” said Larrañaga when emphasising the ability of his sixth-year senior in getting the ball to the right player at the right time.

“Sam is terrific at getting the ball to the open guy for a three or back to the guy with hot hands. He also sets great screens,” emphasised the veteran coach.

It was Larrañaga that sold a teenage Waardenburg on the Miami Hurricanes during his initial visit in 2016.

“After some flight delays we arrived at Miami and Coach Larrañaga and his wife were still there to meet us. There was a real sense of family,” reflects Waardenburg who has since gone on to obtain a Bachelor’s degree in Geography, added a Master’s degree in Sports Administration in August 2021 and is currently pursuing a second Master’s degree.

Bringing up a century of games, the majority of them in the tough environment that is the ACC, is not a surprise to those that observed Waardenburg’s play in the junior ranks of New Zealand basketball. He enjoyed an outstanding junior career playing for New Zealand national age-group teams, Rangitoto College and North Harbour.

Playing alongside the likes of Dan Fotu (currently a senior at St Mary’s College, California) and Brayden Inger (Cairns Taipans and Southland Sharks) Waardenburg played in one of the most memorable National Secondary Schools Grand Finals of all time.

Rangitoto led Palmerston North Boys High 60-35 at half-time in the 2016 final and appeared to be cruising to victory. Led by Callum McRae (now at UC Riverside) PNBH appeared to have completed the most remarkable of comebacks when they held a slender 81-79 lead with under 8 seconds to play – only for Rangitoto guard Cameron Stone to win it on the buzzer with a ‘Hail-Mary’ shot from just beyond half-way.

Waardenburg has also produced some notable performances on the international stage.

2016 was quite a year as he helped New Zealand to fourth place at the FIBA 3×3 U18 World Cup in Kazakhstan and an even better result at the FIBA U18 Oceania Championship in Fiji.

He played a major part in New Zealand upsetting Australia in the final of the Oceania Champs. He recorded a double-double of 11 points and 12 rebounds in the 57-51 Grand Final win, a result that qualified the Kiwis for the FIBA U19 World Cup in Egypt and denied Australia a spot.

At the 2017 World Cup in Egypt, he averaged 10.4 points and 7 rebounds, recording valuable double-doubles against Argentina (15 points and 10 rebounds) and Germany (11 points and 12 rebounds).

Into the final three months of his collegiate career, Sam will be keen to end his time at Miami with another trip to the ‘Big Dance’ – the NCAA Tournament. Going deep in the ACC Tournament in Brooklyn (March 8-12) will be pivotal, but for now a 6-1 start to conference play is a great springboard to success for the Hurricanes.

So is playing 100 games for the Hurricanes.

Kenny Stone played an important role in Waardenburg’s early development, being his coach for all four national championship successes with Harbour and Rangitoto College. His sentiments are echoed by all of the New Zealand basketball community.

“All the best for the 100th game and the rest of them in your college career at Miami.”

Career at a glance:

2017-18; Played in 21 games off the bench as a Freshman, as Miami progressed to the NCAA Tournament – losing 64-62 to Loyola Marymount in the first round.

2015; Played for New Zealand at the FIBA U16 Championship in Wellington. Named Tournament MVP after leading Harbour to the National U17 title. Was a member of the Rangitoto College team that won the National Secondary Schools National Championship for the first time.

2014; Played for NZ U14’s at the Australian State Championships.

2013; Named to the Tournament team as North Harbour won the U15 National Championship.

Full list of Kiwis to have played 100 NCAA Division I Men’s basketball games.