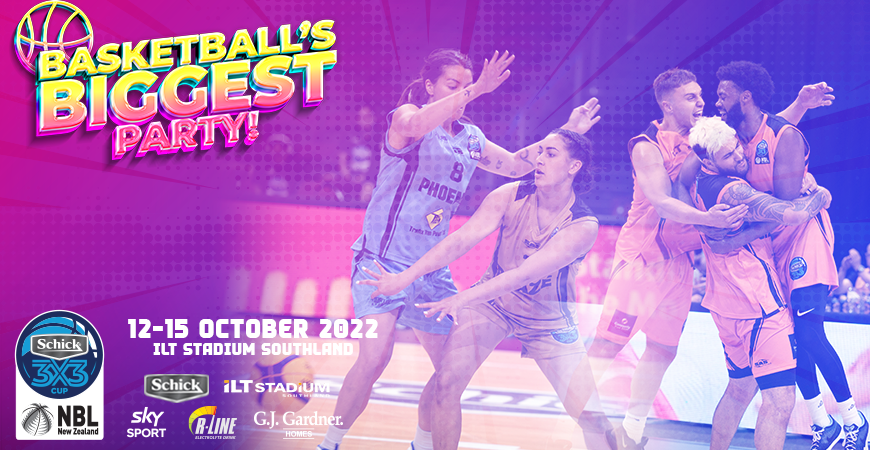 Plans are well underway for the return of destination event the ‘Schick 3×3 Cup’ this October, with an expanded format set to deliver an elite standard of 3×3 basketball action for Kiwi fans.

The Schick 3×3 Cup will be held at ILT Stadium Southland in Invercargill from Wednesday 12 to Saturday 15 October, and this year features an impressive 32 teams (16 men’s and 16 women’s) in non-stop action over the four days – with games broadcast live on Sky Sport.

Teams and their players will come from domestic National Leagues, and will include athletes from the Tall Ferns, Tall Blacks and their respective 3×3 national teams. Over 120 Kiwi players will fly into Invercargill for the exciting four-day event.

Basketball New Zealand (BBNZ) is also working to include an exciting international component which runs alongside the main event. This expanded competition will replace the Christmas Classic event, which unfortunately is not able to proceed in Auckland this December as originally planned.

General Manager Leagues, Huw Beynon, says that this will be the pinnacle 3×3 event in New Zealand this year.

“The Schick 3×3 Cup is an opportunity for Kiwis to watch their favourite players competing in a fast-paced, tense and exciting 3×3 competition; we’re extremely lucky to be able to have something like this on our doorstep,” says Beynon.

“Thanks to Schick and their ongoing support of 3×3 basketball in New Zealand, this edition of the Schick 3×3 Cup is going to be bigger and better than ever – the plan is to have teams from both here and overseas, and some compelling storylines that we’ll share over the coming months. Our ongoing partnership with ILT Stadium Southland means once again we can put on a great show at a world class venue.”

Beynon says that the growth of the Schick 3×3 Cup coincides with the rapid growth of 3×3 basketball of a global level – and with New Zealand’s growing success in this sport.

“3×3 is the largest urban team sport in the world and among the most watched online, it’s massive; the shorter games and fast-paced atmosphere are perfect for today’s sporting fan.

“The recent success of the 3×3 Tall Blacks in the FIBA 3×3 Asia Cup [earning silver] and with both 3×3 national teams heading to the Commonwealth Games in Birmingham later this week, means that New Zealand is performing well on the world stage – and the Schick 3×3 Cup underpins that success, by providing an elite level of competition for these athletes to be part of in their own backyard.

“We, like all sports, have suffered through a fair few disruptions over the last two years, and we’re incredibly grateful that our partners, Schick and ILT Stadium Southland, have stuck with us through it all. We look forward to bringing high level 3X3 basketball back to New Zealand in October.”

ILT Stadium Southland General Manager, Nigel Skelt says he is thrilled to again partner with BBNZ in bringing this back event to the venue and on a larger scale.

‘’Hosting the event in the school holidays provides an awesome opportunity for Kiwis to come and explore the deep south whilst supporting their respective teams. I also believe that having Southland represented by both Men’s (Sharks) and Women’s (Storm) teams this year will provide the ultimate fan experience for the province,” says Skelt.

Andre DeBeer, Business Director, says that Schick is delighted to be supporting this event again in 2022.

“We’re very proud to be getting right behind 3×3 as it continues to grow around Aotearoa from both a player and fan perspective, and we know the action and atmosphere on and off the court in Invercargill will be electric!”

About the Schick 3×3 Cup

The Schick 3×3 Cup was conceived by Basketball New Zealand (BBNZ) in the organisation’s drive to lift the presence of 3X3 and see it gain further traction in New Zealand, with Schick coming onboard to make the tournament a reality.

The inaugural event was held in 2020 and featured ten men’s and ten women’s teams, including the majority of the NBL teams from throughout New Zealand. Played at ILT Stadium Southland in Invercargill, the event saw the Southland Sharks and Auckland Dream taking home the men’s and women’s 3×3 Basketball national titles respectively.

Since then, Covid has impacted the delivery of this tournament, both for the 2021 event and earlier this year; the Schick 3×3 Cup forced to postpone on two occasions due to being able to operate under the Government traffic light systems in place at the time.

The 2022 Schick 3×3 Cup returns to ILT Stadium Southland from 12-15 October, with 32 teams competing for the national titles over four exciting days.

Tickets to this event will go on sale via Ticketek shortly.