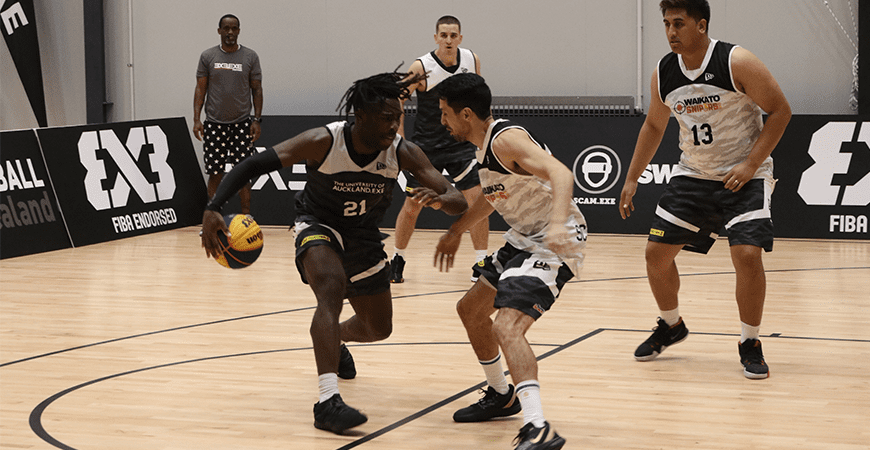 The final round of the 3×3.EXE Premier League concluded just after one o’clock this afternoon, but all four teams heading to Tokyo had already been confirmed before the last game. Swish.EXE and Canterbury.EXE finished first in the respective conferences, granting them automatic qualification to the finals, while it was University of Auckland.EXE and Lincoln University.EXE claiming the runner’s up prize of a spot in the qualifying tournament.

Swish.EXE and University of Auckland.EXE will wing their way to Japan in three weeks after a pulsating final round of basketball in the North Island’s 3×3.EXE competition in Auckland on Saturday night.

Swish was almost a certainty to make the cut ahead of the final round and were playing for top spot and automatic qualification into the Japanese event.

They achieved their goal by making the semi-finals. A comfortable pool play win against ValleySeezn.EXE was enough for them to make the last four.

Auckland ended up claiming the four points in round eight, but it was their big group stage win over the previously second-placed Waikato Snipers.EXE which proved pivotal in them earning a trip to Japan.

Their 21-9 demolition of the Snipers meant they made the semi-finals and ensured their closest rivals would not make it out of their pool. Not allowing them to claim a point saw them leapfrog ahead and earn the chance to play in the qualifying tournament in Japan.

Auckland squeezed past Swish 21-19 in the first semi-final, while Scam.EXE were too good for Coasties.EXE with their 21-18 win.

Riding on the high of already knowing they’d qualified for Tokyo, Auckland cantered away 21-14 in the final.

Auckland player Lis Haraqia said his team had been guilty in the past of lacking energy and intensity but in a must-win situation they stepped up.

”We wanted to shoot the ball, hustle hard and play defence.

”We’ll take our game over to Japan.

”We know we are a strong team that can shoot well.”

Swish player Karl Noyer said his team let a few too many players knock down perimeter shots against them in the final round and he said fitness would be a key in Japan.

University of Canterbury.EXE and Lincoln University.EXE will represent the South Island at the 3×3.EXE premier tournament in Japan next month.

The two best teams in the South Island conference met in the final of round eight at Christchurch’s Ara Institute on Sunday.

The pair play contrasting styles, with Lincoln relying on ball movement and outside shooting. Canterbury, however, can play inside and out, running most of their game through Canterbury Ram Brent Fisher, who has dominated the paint throughout the competition.

Accurate perimeter shooting from Canterbury’s Paul Stephenson and the presence of Fisher inside lifted Canterbury to another round win.

Lincoln only needed to make the semi-finals to guarantee themselves boarding passes and they did this in their 21-17 win over Atami.EXE.

Lincoln’s sharp two-point shooting can be hard to contain and with the standard style of 3×3 basketball involving more action in the paint, their long-range shooting may be a point of difference overseas.

Stephenson said he was thrilled with how his team went defensively, especially trying to limit two-point opportunities and that was something they’ll need to keep up in Japan.

Lincoln player Ihaia Kendrew said it was a case of getting the job done and that they would look for ways to combat the heat and outdoor conditions of Asia once they land.

The winners of each of the South Island and North Island conferences after all eight rounds will qualify for the 3X3.EXE Premier finals in Japan.

The teams that come second in each of the NZ conferences will go to a qualifying tournament, and the winning team will be given automatic entry in the main tournament. With all expenses paid, those four teams will compete for a share of USD$20,000 in prize-money in Tokyo in September. The winner of the big Tokyo based event will also qualify for a FIBA World Tour Masters Event.