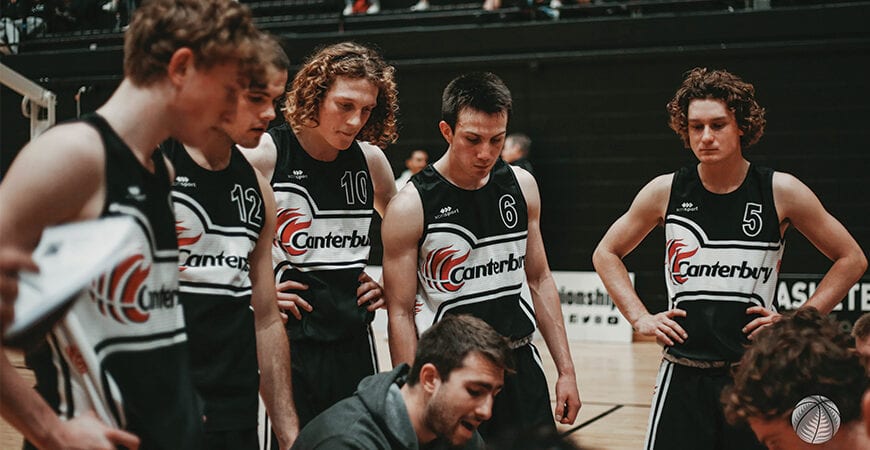 The Men’s and Women’s finalists have been found at the Aon Under 19 National Basketball Championships being held at Eventfinda Stadium on Auckland’s North Shore with Canterbury to feature in both showpiece games.

Canterbury will take on Wellington in the Men’s Grand Final and Waikato in the Women’s showpiece game.

In the first men’s semi-final Otago made a valiant effort to erase a 26-point deficit, but eventually went down to Wellington 91-82.

Wellington, with Kael Robinson (19 points) and Josh Tutagalevao in good form, had a 33-20 lead at quarter time, extended to 53-30 at the main break and appeared to be headed for a clear-cut win.

However, Otago enjoyed much the better of the second half and when Josh Reeves (29 points) dropped a long three Otago trailed 86-79 with 2:29 on the clock.

Dallas Hartmann (27 points) reduced the deficit by a further two and Otago could sniff another come from behind victory.

Wellington, from cruising with a substantial lead, were looking over their collective shoulders when Michael Ruske made it a 4-point game with 49 seconds to play – (86-82).

It was left to Ezrah Vaigafa (15 points) to seal the deal for the men from the capital.

Canterbury used a strong second-half performance to overcome North Harbour in the second semi-final. The hosts made a flying start, Josh Kooiman making a couple of threes, as they established a 15-5 lead.

The remainder of the first half remained tight, Harbour ahead 44-40 at the interval.

Canterbury grabbed their first lead of the game at the mid-point of the third quarter and with Josh Book making 18 of his 31 points in the period, they held the ascendancy at the last break ahead 74-68.

Zach Riley scored the first 11 of Harbour’s fourth-quarter points as the maroon and white’s closed to within two points (83-81) with five minutes to play.

Book and Aidan Tonge stretched the Canterbury lead to 8 points before Christian Martin made consecutive baskets to keep the contest tight.

Walter Brown and Tonge made key plays in the closing stages to book the Cantabs a deserved a place in Tuesday’s final.

32 points from Hannah Mischewski and a double-double (22 points and 12 rebounds) from Ashlee Strawbridge propelled Canterbury to a 93-75 win against Taranaki in the first Women’s semi-final.

When Mischewski landed her fourth triple in the opening 16 minutes Canterbury were well in control of proceedings with a 48-31 lead.

Raquel Sampson (22 points and 17 rebounds), had 11 first-half points for Taranaki, but her team trailed 54-37 at the interval.

Transition baskets from Opal Hardy and Gemma Walsh provided Taranaki with impetus, but that was quickly put in check as the Canterbury lead grew beyond 20 points.

The pair were also at the heart of a Taranaki revival late in the third, but the diminutive Maia Williamson scored from deep to ensure the Canterbury advantage was substantial (75-57) with ten minutes to play.

Sampson reduced the Taranaki deficit to 9 points with under 4 minutes to play, but scores from Molly Cockburn (23 points) and Hannah Crabtree ensured there would be no further alarms for the Cantabs.

Waikato, paced by 23 points from Melika Samia and 21 from Breeje Schuler,  joined Canterbury in the Women’s Final after defeating Waitakere West 82-46.

Early on all five Waikato starters registered points as they established a 20-15 opening quarter lead.

Waikato put on the defensive clamps in the second frame – when Kataleena Leslie made a neat reverse layup 6 minutes had elapsed between Waitakere scores and Waikato were out to a 29-17 lead.

Despite being held to 11 points in the period, Waitakere were well in the contest at half-time trailing just 36-26. Samia lead all scorers at the break with 12 points.

Schuler joined Samia in double figures and when Reese Anderson sliced through the Waitakere defence the Waikato lead was out to 20 points.

A Safena Te Nana-Williams basket gave Waitakere some hope, but it was only a glimmer as they trailed 57-36 at the three-quarter mark.

Dominique Stephens completed a double-double of 10 points and 10 rebounds, her ascendancy in the paint a reflection of Waikato’s overall dominance.

The Grand Finals will be two of the five livestreamed games shown on Tuesday. The Women’s final will tip off at 3pm followed by the men’s championship game at 4:45pm.

The Day four livestream games will be here on Stuff Sport and www.nz.basketball/tv.