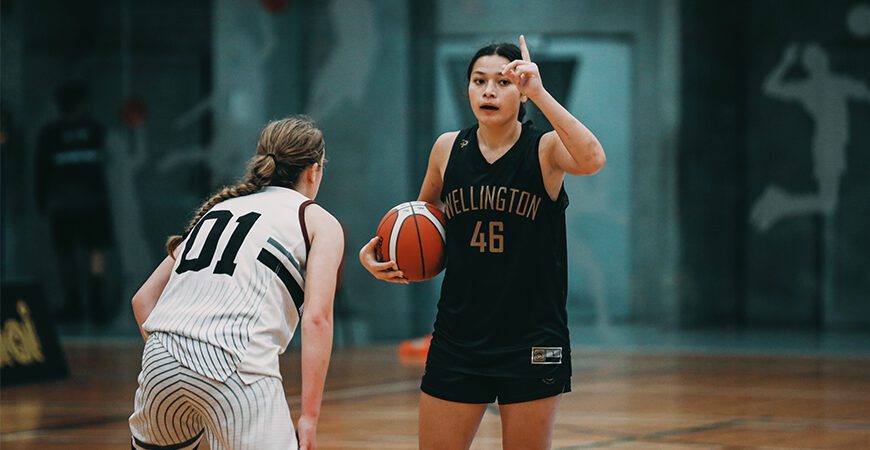 After winning their Quarter-Final against Otago 72-62, North Canterbury progressed and looked hot favourites against Wellington, who beat Rotorua 58-68 earlier in the day. The intensity kickstarted in the first half, with North Canterbury taking the first quarter by eight, giving them a strong advantage heading into the rest of the game. Wellington would have a huge 3rd quarter with Tatiana Mareko working hard in the paint to help her team to take the lead. Wellington outscored North Canterbury by 11 points in the 3rd, setting up a frantic finish. Although Canterbury lead in the steals, the rebounding (54-46) and the shooting, their foul count saw them send Wellington to the line more times than not. Wellington converted 21/31 (67%) free throws compared to Canterbury’s 10/15 (66%) earning Wellington the 67-71 win and sending them to the Grand Final on Saturday.

Waikato who remained unbeaten after a close encounter with Taranaki (59-66) would take on Harbour A in the Semi-Finals, who managed to breeze past Canterbury A 40-65. Waikato got off to a flying start, finishing the first quarter 21-10. Harbour struggling to find the back of the net, while Waikato were taking their chances from turnovers. Temepara Walker for Waikato proved to be an incredibly reliable asset from the floor and on the rebounding end, scoring a game-high 17 points and finishing and collecting 11 of Waikato’s 55 rebounds. Waikato threw up a nice 30/69 (43%) from the floor compared to Harbour’s 19/66 (28%) and had a staggering 48 points in the paint, while ensuring Harbour would work for their 22 points in the paint.  Waikato took their lead out to 30 at most in the game and managed a comfortable win 81-52.

Watch the Aon U17 Girls Grand Final, Wellington vs Waikato from 2:45pm on Whakaata Māori (Channel 5 Freeview, Channel 19 Sky) or at https://nz.basketball/tv

Harbour and Canterbury A were the first to face off in the first Semi-Final for the boys. Harbour narrowly beat Hutt Valley in a 85-78 thriller to help them progress, while Canterbury did their thing, beating Wellington 124-110 in a high-scoring affair. This game would be no different, as a total of 52 points were scored in the first quarter. Both teams putting on a stunning shooting display, as well as an extremely skilful show of ball movement and fancy passing. Standing out for Harbour was Hamza Zahran, who scored a whopping 38 points at 63% from 2PT range. He nailed 8-9 free throws and gave Harbour a chance. Zahran also topped the rebounding charts with 17. With the scores at a close 87-93 by the end of the 3rd, we were set for a dramatic finish. Canterbury’s shooters decided to take charge, Louie Gordon stepped up and made his game-high 39 points known to the opposition, shooting five 3PT shots, and nailing 10-12 83% from free throws. He was fouled nine times throughout the game, mainly driving to the paint. That driving to the paint earned Canterbury a 111-119 win and sealed their place in the Grand Final.

Semi-Final 2 was strange, in a way that if you asked if Waikato would win, we would respond with which one? Waikato A, undefeated, took out Waikato Country in their Quarter-Final 92-118 to progress while Waikato B made Waitakere West run with a 68-51 victory. Waikato A [Black] would take on Waikato B [Red] to see which team would progress through to the Grand Final. Black shot out to a first-half lead by 15 points, making it 57-42. As mentioned by the commentators, there was plenty of skill involved in the first quarter, and some smart IQ going on. That would have to come down to the teams playing one another in scrimmages at training. Liam Davis made Red pay when he was left open, shooting an incredible 90% from the floor, and 100% from 2PT range. He high scored with 22 points. His 22 minutes were worth it and he didn’t miss a beat. Samuel Maggof for Red also took his chances with the ball, scoring 21 points, but Red couldn’t quite capitalise overall, struggling to find form and shooting 29/68 (42%) from the floor. Black had all of the stats pointing their way, including 64 of their 103 points being in the paint compared to Red’s 38. Defence was a big factor in Black’s 103-81 win and helped Black [Waikato A] seal a place in the Grand Final.

Watch the Aon U17 Boys Grand Final, Canterbury A vs Waikato A from 4:30pm on Whakaata Māori (Channel 5 Freeview, Channel 19 Sky) or at https://nz.basketball/tv Photos of the tournament can be viewed at https://bbnz.link/photos