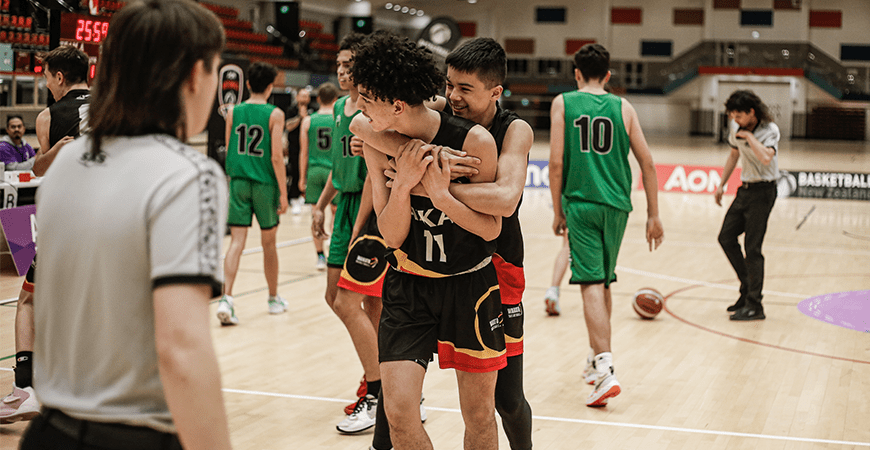 Harbour A Girls and Waikato Boys get the job done on Day 4 of the Aon U15 Nationals in Auckland.

Last year, Harbour would lose to Waikato 77-46 in the Grand Final of the Aon U15 Nationals, but this year was a new year for the North Shore based team. Harbour hadn’t dropped a game all tournament, beating Manawatū 102-55 in the Quarter-Finals and comfortably taking over to be 3rd Place medallists 89-69. Kodee Williams-Sefo was averaging 16 points a game, alongside Zenthia Stowers who was averaging 15. Waikato were also undefeated leading up to the final, thumping Counties-Manukau 102-49 in their Quarter-Final and making a remarkable comeback against Tauranga to win 82-75.

The first quarter of the game saw some exciting and close action. A physical encounter that meant accurate passing and scoring off turnovers would determine an early lead. Harbour would come out of the first being one point up (13-14) with a pretty even statline. Half time was a different picture. Kodee Williams-Sefo was a few rebounds off a 17 point double-double for Harbour, and Zenthia Stowers had eight rebounds and nine points. She had played the whole 20 minutes at this point. Waikato spent the second quarter trying to score, only finding the net three times off 22 attempts (13.6%). Harbour made sure they capitalised off of Waikato’s misses, gaining 13 points from turnovers and shooting 14/26 (53.8%) from the floor for the second quarter. Waikato would need to hit their shots in their 21-45 half-time deficit. As the third quarter ended, Harbour’s lead grew to 24, leading 42-66, and Williams-Sefo and Stowers managed to clock double-doubles. Stowers was several assists off a triple-double in her fantastic match, scoring herself 16 points, 12 rebounds, seven assists and five steals. Some other contributions from Bailey Flavell with 23 pts helped the lead increase. Waikato’s Keija Miringaorangi secured a double-double, scoring 15 points and 11 rebounds off her 34 minutes. Anaiya Nelson would also come to the party, top scoring for for her team with 18.

The end result, Harbour A would beat Waikato 87-60 in a skilled and physical encounter, and would take home the Gold Medal at the Aon U15 Nationals for 2022.

When we look back at last year’s Aon U15 Nationals Final, Harbour got the jump on Hawkes Bay 81-58. This year, Manawatū made it through to the Grand Final to take on Waikato. The two teams had already met this tournament, with Waikato holding off a late surge from Manawatū to win 76-74 in pool play. That would be Manawatū’s only loss of the competition so far, beating Te Aroha/Thames Valley 73-57 in the Quarter-Finals and toppling over a determined Hawkes Bay side 95-84. Waikato on the other hand went through undefeated, knocking out Waitakere West in their Quarter-Final 77-72, and breezing past Nelson in their Semi-Final 97-78.

Waikato rushed off to an early lead 25-14 in the first quarter. Manawatū were struggling to find form in the field goal department, shooting 4/20 (20%) from the floor early on. Waikato were not able to miss, shooting 9/19 (47.4%) from the floor including 5/7 three pointers at 71.4%. Waikato also managed to grab significantly more rebounds in the first, seeing them go to 17 early on to Manawatū’s 11. Waikato also managed to snap an 11-0 lead early in the first, leaving Manawatū scoreless for almost three and a half minutes until Nehemiah Su’A splashed a three to get the scoring going. Going into half time, it read pretty much the same. Manawatū were down 41-28 and looking for answers from their shooting. Scoring in the paint would continue to be Waikato’s success, scoring 22 of their 41 points in there at the half break, compared to the opposition’s ten. While turnovers weren’t the problem for Manawatū, the defensive efforts of Waikato were proving to be far too much. Merrick Rillstone for Waikato had a half-time double-double with 16 points and ten rebounds in a very impressive performance. He had already made 4/7 three pointers (57.1%) in the half alone. The rest of the game continued the trend of Manawatū struggling to get the ball in the hoop, finishing with 22/77 (28.6%) for the game. Turnovers became an issue, finishing wit 27 of them, which Waikato used to their advantage and scored 22 points off. While Manawatū continued to dominate in the rebounds (especially offensive, 19 for the game), they still couldn’t turn those rebounds into points. Rillstone was the talk of the game, scoring 29 points, 16 rebounds and claiming two steals. Noah Heke for Waikato also stepped up, scoring 28 points with 63% from the floor. He also stole the ball six times in his 38 minute performance. The boys in green and black had some exciting performances in the rebounding department, with Gift Niyonzima coming up with 21 points for 14 rebounds, four of those being offensive. Lachland Crate would block 3 shots, and snatch a quick eight points and nine rebounds to give Manawatū some life in the 4th. 13 points a piece from Su’A and Te Ahitaewa Hakaraia-Hosking couldn’t help close the gap between them and Waikato.

Waikato would finish the game with a convincing 90-65 win over Manawatū.

Final results and Team Placings will be displayed on the Aon U15 Nationals page. You can also find all of the games with LiveStats as well as the replays of select games from day three and day four.