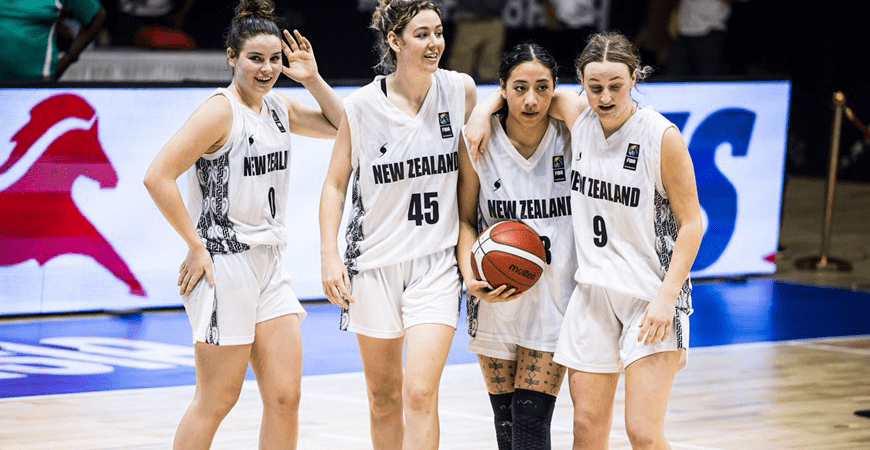 New Zealand defeated India 66-63 in their third and final group game at the FIBA Asian Championship in Bengaluru, India on Thursday.

New Zealand bounced back from their loss to Australia the previous day to keep their top four aspirations alive – but not without a huge scare as India produced a stirring second-half comeback to tie the game late, after previously being down as much as 15 points.

New Zealand scored the first 9 points of the game and India the next 9, before the Kiwis established a 17-9 quarter time lead – a Chatfield put-back the closing score of the period.

It was all New Zealand in the second quarter as a brace of Cowley threes – and a Maddie Morrow trey – helped the Kiwis to a 36-23 half-time lead.

With Lily Parke scoring the first points of the third frame, the New Zealand lead was out to a game high 15 points with the Junior Tall Ferns in control of proceedings. That control and advantage dissolved in the second half.

Vitolia Tuilave and Aria Cowley (16 points) kept the New Zealand lead in double figures before India, encouraged by the vocal home crowd, stormed back into the contest. A 9-0 run from the hosts reduced the deficit to a single point before Parke (11 points and 9 rebounds) steadied the New Zealand ship with four made free-throws – the Ferns ahead 51-47 at three-quarter time.

Cowley made her fifth triple of the game as the fourth quarter became a tail of missed opportunities for both teams. Four times India tied the game, but couldn’t come up with the go-ahead play – New Zealand unable to wrestle back the dominance displayed in the second quarter.

Both teams had opportunities to seal the victory but it was Chatfield (8 points, 10 rebounds and 6 assists) that made a crucial layup with 65 seconds to play. Cowley made a free-throw to stretch the advantage to three points inside the final minute  and with New Zealand maintaining their composure in the closing seconds, India were unable to produce a game levelling score to the relief of the Kiwi players and supporters.

New Zealand face Chinese Taipei, victorious over China a couple of days ago, in Friday’s semi-final play-in game with nothing less than victory needed to keep their World Cup ambitions alive.

New Zealand Schedule: (times given are local in New Zealand).

All games will be shown live via https://nz.basketball/tv/

Links to the streaming, rosters, statistics and live stats can be found here: https://www.fiba.basketball/asia/u18awomen/2022

Alana Paewai – Waikato Basketball (selected but unavailable due to injury)