Keith Mair back in NZL and still courtside 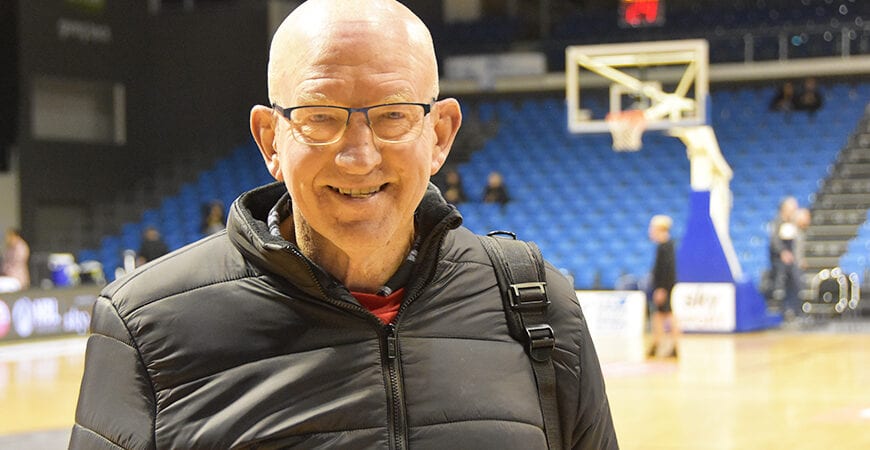 Not many have been around basketball longer than Keith Mair, especially at the 2020 Sal’s NBL where he’s attended all but one of the 55 games played so far.

In March this year, Mair returned to Aotearoa from his home in Wales. Initially he was just home for a visit, then Lockdown was announced and Mair found himself restricted to a small hotel room in Wellington.

Living abroad, the long-time qualified accountant has been serving his beloved game as an administrator in Great Britain, as a Chief Executive, Chairman, and coach in the English and Welsh basketball administrations. Of course Mair is best known as the legendary Tall Blacks coach, a role he served from 1984 to 2000.

“I got into coaching whilst in the Hutt Valley. I used to play a lot, but suffered a knee injury and that was it as a player. But it wasn’t long before a bunch of young fellas asked me to coach. I agreed to give it a go and it went from there.”

His first coaching gig was with the Ratana Cougars Club in 1969, but we were soon promoted into higher honours with more senior teams. Mair says he remembers many of those early victories fondly, including the time he coached Timaru Boys’ High School to the Secondary School National Championship.

They met the now-defunct Church College in the final of the tournament and, although they were undersized, somehow got the job done.

“I’ll never forget 1981. Somehow we built Timaru Boys up, we went to the nationals I think six or seven years in a row. But that year in the middle, Church were the team you had to get past. We met them in the final and we weren’t the biggest team, but ended on top. Even though we weren’t the biggest, we still had some great talent. Three of the players went on to play for New Zealand Juniors: Richard Evans, Tony Ward and Dale Burtenshaw. Those three were very talented and two of the other starters were a very good starting five. The guys off the bench knew their roles pretty well. The other two in the starting five was a Timaru local who was very good at cricket, Jeff Dore, and then there was an American field scholar, Scott Martin.

At that same point in time, Mair was coaching what is now the Junior Tall Blacks and held the job up until he was appointed as an Assistant Coach for the Tall Blacks in 1984.

He took over the head role in 1988 and led the team until the turn of the new century. During this time, his achievements were many including the first-ever test series win over England in 1990. Series wins over Japan in 1990 and 1994 followed, South Korea in 1996 and England once more in 2000. Mair also oversaw the first win over a US Division One college team in 1994, wins against the Netherlands, Cuba, Czech Republic (twice) and Canada.

Under his direction as Head Coach, the Tall Blacks won the William Jones Cup in Taiwan in 2000. That same year, he also took the team to Sydney where they were the first New Zealand men’s basketball team to make an appearance at an Olympic Games.

Despite having a big influence on some of the greatest achievements in New Zealand’s basketball history, Mair says he never envisioned any of it.

“When I started coaching, it wasn’t with the aim of getting anywhere. I just liked it.

“To me, it was an extension of playing. I think it’s the greatest sport in the world to play, and I think the best way to stay with it if you’re not playing is to coach.

“It’s good to be part of a team and the best thing is I’ve never wanted to be a coach or a manager that just sits on the sideline. Instead I wanted to be part of seeing a group of people improve and develop collectively, individually and as a team.”

“I also enjoyed being a student of the game. I had to get a book on coaching and study it. The first thing it taught me was how little I knew, even though I’d been playing for a number of years. I didn’t grow up playing basketball with coaches who taught you fundamentals because there weren’t any around in those days to speak of.

“I also saw the game change, like when FIBA bought in the three-point line, it changed quite a lot when FIBA changed from a 30-second clock to a 24-second clock, that was a major change in the way the game was played. In essence, you don’t stop learning because the game is always evolving – much like life.”

As good as Mair got at adapting his teams to fit certain traps and schemes on the floor, one of the biggest hurdles he faced was having to beat Australia to qualify for the bigger FIBA-hosted events.

Mair says the Tall Blacks never backed down from playing their arch-rivals, but it was difficult to assemble the team early enough and prepare. He says it was commonplace for national teams to assemble on a Friday after work, train through the weekend and then jet off to play their foes across the ditch on Sunday to play them on Monday.

“You knew you were on a hiding to nothing before you’d even stepped on the floor due to the lack of preparation time. That’s why it was amazing to see how a group of guys could come together as they did and do what we wanted them to.

“The Australians went through some pretty good patches of players and certainly their team leading up to the Sydney Olympics with the likes of Andrew Gaze and Ray Borner was strong, but we did give them a good crack, all things considered.”

Mair called time on his involvement with the Tall Blacks after of the aforementioned Olympics (2000), making more time for his role as Head of Sport Development for the ‘Hillary Commission for Sport, Fitness and Leisure’ which he was already doing in tandem from 1988.

He accepted the job as Chief Executive of England Basketball in 2003 and served over a decade in the position, all whilst keeping a close tab on the game back home.

A lot has changed since he started working in New Zealand basketball and he is happy to say the game is in a better place.

“It’s remarkable how much the game has grown since I started playing and, as someone who has been a part of some dark times, it’s pleasant to see where the game sits.

“Having been around New Zealand basketball teams who struggled through the 60s, 70s, 80s and 90s for exposure and acceptance, it’s pleasing to read about the participation numbers in schools and having senior teams made up nearly entirely of professional players.

“I have always looked at basketball as the greatest sport in the world and it looks like others are doing the same.”

Mair won’t be deciding on his return to Wales until the travel restrictions ease. For now, he’s loving his return to the side of a New Zealand basketball court, even if it is as a spectator at the Sal’s NBL in Henderson, Auckland.

“It’s been a unique competition, it’s been fantastic. I can’t remember any sports tournament of this nature that’s lasted six weeks

“It really has put players under mental and physical pressure, they have been tested. I think if you’re a selector, you’d be excited. Pero Cameron must be watching this, taking it all in, and feeling good about what he sees. It’s been a first-class environment to assess basketball talent.”

This ‘lifer’ will be courtside this Saturday, for the Sky Sports Tall Ferns Showcase tipping off at 5pm. Then he will be part of the panel-of-five people who votes for the Grand Final MVP of the Sal’s NBL Grand Final at 7pm.