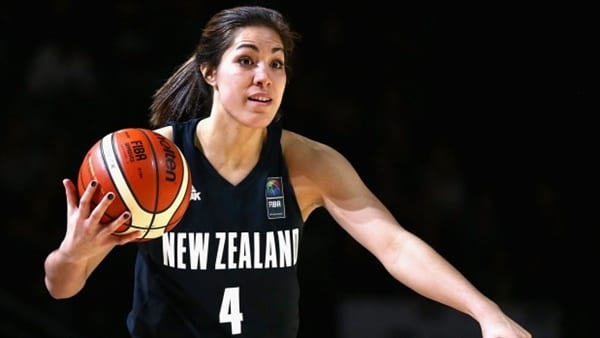 After the excitement of an overtime victory the previous night the Tall Ferns were beaten 72-52 by Latvia in Riga on Saturday.

Jillian Harmon followed her 22 points haul from the first game with 11 points and 8 rebounds and the consistent pair of Micaela Cocks and Toni Edmondson both scored a dozen. After a quiet performance on Friday Kalani Purcell bounced back with a team high 14 points to go with 3 rebounds, 4 assists and 2 steals.

The early signs were good for the Ferns as they scored the first five points of the game and led 14-12 at the end of the first period.

The scores were tied 26 apiece at the half-time break before the hosts moved ahead 46-41 at the three-quarter time mark. Latvia completely dominated the final stanza winning the period 26-11 to take the game and a share of the spoils in the two game series.

Following the game Tall Ferns coach Kennedy Kereama reflected on a patchy performance from his team.

“We had a very good first half and then a half that was not our best at either end. We had a great start to the game, getting the stops we needed and scoring at the other end. However in the second half our offence dried up – we continued to get good looks but shots were no dropping.

“They shot the ball extremely well from the perimeter (9 from 21 three point shooting at 43%) and we simply didn’t do our job on the ball to contest those shots more aggressively.”

Four of the Tall Ferns starters scored double figures but the scoring impact from the bench players was virtually none existent with Stella Beck’s contribution of a single free-throw the only point. This is an area where Kereama will be seeking improvement in future games.

“I believe we have it in us and we just need to find a few more players that can give us some scoring punch off the bench and maintain our effort levels and execution. We have the tools and we will find who those players are in the next leg of the tour.

“We sat Chevannah Paalvast out tonight to get her right from the next part of the tour and Erin Rooney (recovering from knee surgery) should be cleared to play in the next leg. I’m looking forward to seeing what she can bring and adding her to our rotation.”

Whilst Latvia continue preparing for the upcoming European Championships the Tall Ferns now move on to Belarus as their build up for the FIBA Olympic Qualifying Tournament gathers momentum. In Belarus the Tall Ferns will play the hosts as well as Japan and Turkey in a four-team tournament beginning on Thursday.