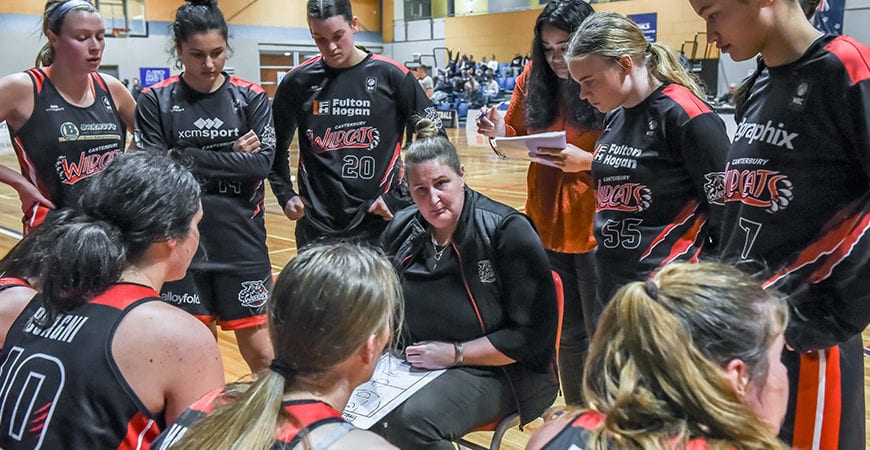 After five years at the helm of the Alloyfold Canterbury Wildcats Lori McDaniel has announced that she is standing down from the head coach position.

The team will begin the search for a replacement with immediate effect.

During her time as head coach the Wildcats have been one of the most successful Women’s Basketball Championship (WBC) clubs in the country.

Since then the team have finished fifth in 2018, and the Wildcats made the semi-finals this year.

McDaniel’s time at the Wildcats has coincided with a boom in popularity of basketball and the subsequent growth and profile of the WBC.

Wildcats General Manager Murray Kennedy is full of praise for the outstanding work that Lori has done for Canterbury basketball and the Wildcats in particular.

“The Wildcats feel very fortunate that Lori has been our Head Coach for the last five years. She has made a huge impact both on and off the court in addition to the WBC competition generally.

“We wish her well in her future coaching endeavours and are glad that she will still be involved in our programme peripherally,” said Kennedy.

Equally complimentary is Wildcats stalwart Shea Crotty.  The former Tall Fern has played eight seasons for the Wildcats, four of those under McDaniel’s stewardship.

“What Lori has given not only to Wildcats basketball but women’s basketball in Canterbury is something I, along with many others, will be forever grateful for. Her commitment, dedication and time given to our team on and off the floor over the five years is something many in the same position wouldn’t have done.

“It’s been nothing but a pleasure to play for Lori and it is sad to see her step back but she has done a remarkable job,” added Crotty.

As for Lori it hasn’t just been winning championships.

“Winning back to back titles was excellent but seeing the change in the culture and the way the team approached the game and training and the league (WBC) in general around that time was even more pleasing than the wins themselves,” said McDaniel.

“From there everyone seems to have elevated the way they approach the game. Not just the game but the off court stuff like sponsorship and the impact it has had on women’s basketball in this country is fantastic.

“The rate of growth and visibility of the sport is really promising for the years to come – those are the sorts of things I am happiest about more so than the trophies.”

The success and professionalism initiated in 2016 raised the bar in terms of both the Wildcats and the WBC competition.

“Having Murray (Kennedy) come on board at the same time as I did enabled us to have smart uniforms and gear, attract sponsors and be more professional as a team and I think they go hand in hand as it is very hard to do one without the other,” said Lori.

“I think everyone in the WBC has stepped up what they are doing and it shows. It’s definitely a group effort with everyone showing a lot of energy in changing the way the game is perceived in our country. They are doing great things and the WBC final on SKY Sport this year was absolutely fantastic – I think it has been a cumulative thing not just the two teams involved in the final,” added Lori.

Lori is the first to acknowledge that her success and that of the Wildcats is not down to one or two people.

“Having people like Gina Farmer involved, one of our most successful ever Tall Ferns, willing to give up her time and help out really adds value to your programme. I’ve been fortunate to have two assistant coaches all the time so having people like Josh Thompson and Pina Lissaman contributing as well as coaching high school basketball has been fantastic.

“The CBA (Canterbury Basketball Association) have been great support assisting with what we are trying to do and the Canterbury Rams have been one of the few men’s NBL teams to support women’s teams. Having that type of support in our region says a lot about the community aspect of the game. We are just really fortunate to have a lot of good people in key positions that want to see not just women’s basketball grow but the whole sport of basketball grow,” said Lori

The good news is that Lori is not going to be lost to basketball as she will continue in her role as Community Coach and Women’s Development Manager with Canterbury Basketball.

“I love the sport and I’m looking forward to having a little more time to devote to my actual job!

“With the growth of the sport we need to have more coaches so we need to be offering more workshops, more courses, more opportunities so I’ll have more time to provide this,” she enthused.

From a personal perspective Lori will also get the opportunity to spend time with her family.

“My son begins university in August next year and we are going to go on an Asian tour before he does that so taking some time out to spend with him is important.”

It’s rumoured McDaniel might be stepping into another position in the New Zealand system, although nothing official has been released.