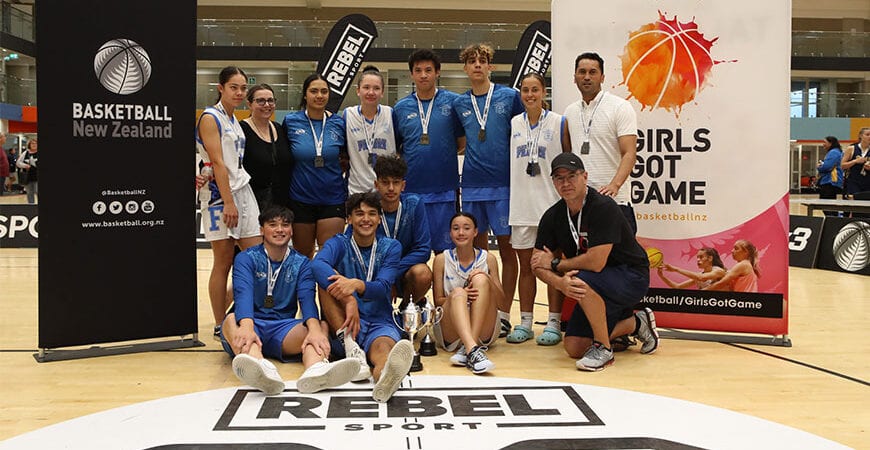 Colleges from all corners of the North Island can call themselves national champions after the Rebel Sport 3X3 Secondary Schools Champs came to a close at Pulman Arena this afternoon.

Waikato tallied the most titles of all the regions represented with Fraser High School, Hamilton Boy’s High School, St Peter’s School, Cambridge and Hamilton Girls’ High School taking out the four of the eight crowns on offer.

Perhaps the most exciting contest of the lot was the Senior Girls Elite showdown, where a last-minute shot from Lauren Tewhata in close saw Queen Margaret College triumph 9-8 over Fraser High School.

Fraser led for nearly the entire contest, thanks in large part to the output of Aria Cowley. The guard ran the pick and roll to great effect, converting from both inside and out.

QMC wasn’t without their standouts though – Lily Taulelei answering close to all of Cowley’s baskets with sweet-looking jumpers. Tewhata was also active throughout, but her two to tie the decider with as many minutes left and game-winner were her most notable contributions.

Fraser’s Senior Elite Boys would go one better than their Girls after toppling St John’s Eagles in the day’s final contest. The trio of Smilers, Ezra, Caleb and Tzar, were the names on the commentators’ mouths for much of the show, using their size advantage to outmuscle the smaller opposition.

Te Hauroamairangi Tawhara made sure St John’s stayed within striking distance with outside makes, yet they always seemed to be chasing the game as Fraser got right to the rim with ease.

St John’s kept the crowd on the edge of their seats with a flurry of late deuces, but it would be too little too late as Fraser held on 18-16 to earn national honours.

St Peter’s  B shot out to a 3-0 lead early in their bout and although One Tree Hill College did rally to even the scores, Hana Lacey-Rameka’s shooting for the Cambridge-based side proved too much to handle as they went on to capture the victory 15-6.

Glendowie College were quicker out of the blocks than Hamilton and the scoreboard read 4-1 in their favour as a result. The boys in the red and black worked their way back into it with scores from Sam Walker and Elias Lepou, but the scores would remain neck and neck into the dying stages.

Marksman Ben Cooper drained a long two to bring Glendowie to level terms as the clock ran into its final couple of minutes, however, it was Andrew Sun who put the nail in the coffin with a two of his own with 30 seconds to play and Hamilton finished 16-12 to the good.

The draw, pools and key tournament information can be found here.

The live stream for this event is through Sky Sport Next available on YouTube from tomorrow onwards. For easy access, watch the stream at nz.basketball/tv.

Results from all today’s fixtures will be updated after each round and can be found at here.