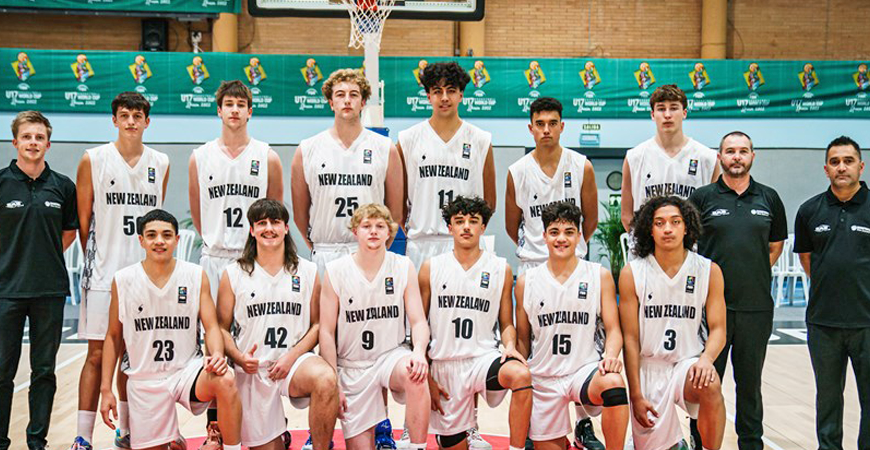 Canada has beaten New Zealand at the FIBA Under 17 Basketball World Cup in Spain overnight, registering a comfortable 94-46 win over the Kiwis thanks to 16 points from Ishan Sharma, 14 from Christian Nitu and a 10 rebound, 4 block effort from Canadian big man Olivier Rioux.

Hunter Trego led New Zealand with 14 points on 5/11 shooting (including a trio of threes), while Will Shortt tallied 8 points, 6 rebounds and 2 blocks. Nic Book was held to 7 points on 2-18 shooting but had 12 rebounds and 3 blocks, while Dante Matakatea registered 6 points and 7 rebounds.

Canada held the Kiwis to 25% shooting for the night, while utilising strong defensive pressure with their 15 steals forcing New Zealand into 27 turnovers – which the Canadians turned into 29 points. While both teams were evenly matched in rebounds (51 to 52 for the Kiwis), Canada held a strong advantage inside with 70 points in the paint against 22 for New Zealand.

Canada began the game strong defensively, with the Kiwis not scoring their first basket – a jump shot by Phoenix Trego off an assist by brother Hunter – until 2 minutes, 23 seconds into the game.

The substitution in of Matakatea midway through the first quarter provided a spark for the Kiwis; the small forward hitting his first jumper then cramming home a dunk off of a feed from Book to give New Zealand their first lead – 8-7. A layup from Book briefly extended the score to 10-7, before Canada forged ahead with an 8-0 run to grasp a 15-10 lead at the end of the period.

The kiwis first points of the second quarter would provide the game’s biggest highlight, with Shortt driving and dunking on 7-foot-6 Canadian Rioux in spectacular fashion. But that would be one of only three baskets scored by New Zealand in the quarter, with Canada outscoring the Kiwis 22-8 in the frame to build a commanding 37-18 lead at the half; the Canadians holding New Zealand to 23% shooting (7-31), including 0-9 from outside the arc.

Canada would go on a 9-0 run to start the third, building out a 46-19 lead; Shortt scoring the Kiwis first basket of the quarter at the 5.43 mark. A 5-0 run by the Kiwis briefly narrowed the gap, but Canada soon extended their lead to 59-30 at end of quarter thanks in part to Stephen Osei’s 9 points in the period.

Another run by Canada to start the fourth (13-2) moved the game well out of reach for the Kiwis, despite New Zealand playing some of their best basketball of the game in this quarter; Hunter Trego shooting 4-5 in the period as one of the team’s lone offensive bright spots. Canada win this one by 48 points, which moves them to the top of Group A after one game played.

New Zealand will now re-group and face its next Group A opponent in Serbia, tonight at 11.15pm NZT. Catch the game live at nz.basketball/tv

Full rosters, statistics and live stats can be found at: www.fiba.basketball/world/u17/2022

New Zealand Schedule: (times given are local in New Zealand)

About The FIBA U17 Basketball World Cup 2022

As event hosts, Spain gained automatic entry. The remaining 15 teams qualified through regional U16 championships with 2 from Africa, 5 from Europe, 4 from the Americas, and 4 from Asia – with New Zealand earning their place after securing a spot in the recent FIBA U16 Asian Championship.

New Zealand is in Group A for pool play, which includes Canada, France and Serbia.