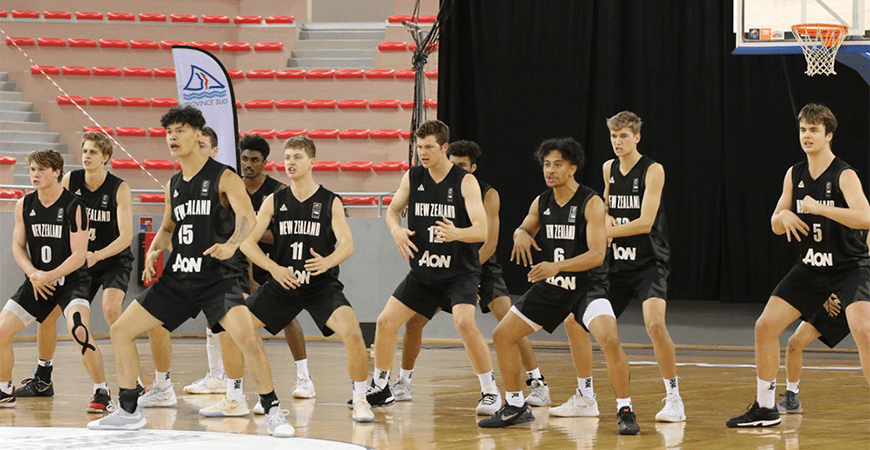 The Aon Under 17 Men beat Samoa 95-37 in the semi-final of the FIBA U17 Oceania Championship in New Caledonia this evening.

Paced by double-doubles from Mac Stodard (18 points and 10 rebounds) and Reihana Maxwell-Topia (11 points and 11 rebounds) plus 16 points (5/11 3PG) from Connor Ngan New Zealand eased to a grand-final showdown with Australia.

The Harbour duo of Maxwell-Topia and Sean Murphy scored triples to open the scoring but sloppy New Zealand turnovers presented Samoa with some easy scoring opportunities and they were very much in the contest at the first break trailing 21-14.

The Kiwis stepped up the defensive pressure in the second keeping Samoa to just nine points in the period. At the offensive end, they were dealing almost exclusively in threes for a time as Ngan, Alex McNaught and Mac Stodard all landed from deep. Cantabrian forward Stodard, returning to something like full after illness kept him sidelined for the first two games, scored 9 points in the frame as New Zealand built a 49-23 lead at half-time.

New Zealand maintained their defensive discipline in the third period but the offence was faltering before a Stodard dunk sparked the Kiwis into action again. Ngan knocked down a couple more threes to take his tally from beyond the arc to five and fellow Auckland guard McNaught made his second triple. Harry Payne and Stodard joined in the scoring action as New Zealand increased their lead to 75-30 at the three-quarter mark.

On a good perimeter shooting night for the Kiwis Zeke Stallworth dropped a couple of threes as New Zealand cruised to the win in the final quarter. Stallworth was amongst seven New Zealand players that contributed to a collective 14 made threes from 41 attempts at 34%.

The victory also confirms New Zealand’s place at the FIBA Under 18 Asian Championship in 2020 where they will be the Oceania representatives alongside Australia.

New Zealand will meet Australia in the grand final on Saturday (8.00pm) after Australia beat Tahiti in the first semi-final earlier on Friday.