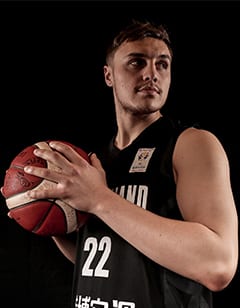 Made the playing 12 against Australia in Brisbane in February 12 but did not take the court.

Following his time in the States he joined the Super City Rangers and also played for the Bay Hawks before signing for the Southland Sharks in 2018 winning an NBL title that season. Had a productive season for the Sharks in 2019 averaging 11 points,  6.4 rebounds and 3.7 assists per game.

Played the 2019-20 Australian NBL season as a Development Player with the Illawarra Hawks appearing in 16 games.